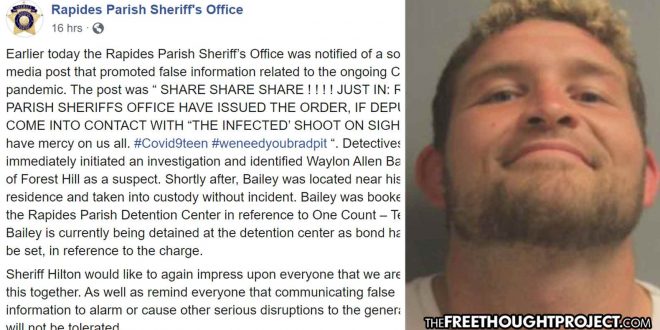 Forest Hill, LA — In what many are calling a massive overreach of police powers, a 27-year-old Louisiana man has been arrested and charged with terrorism for an incendiary, entirely false, yet satirical Facebook post. The Rapides Parish Sheriff’s Office announced the arrest yesterday on their Facebook page.

In what appeared to be a distasteful joke, Waylon Allen Bailey took to Facebook and claimed cops were given the order to shoot and kill anyone who had contracted the COVID-19 virus. One would have to be incredibly dense to believe such a hyperbolic post which is what makes it look like a terrible joke. Nevertheless police showed up at the man’s home and arrested him.

The sheriff’s office explained the debacle on their Facebook page:

Earlier today the Rapides Parish Sheriff’s Office was notified of a social media post that promoted false information related to the ongoing COVID-19 pandemic. The post was “ SHARE SHARE SHARE ! ! ! ! JUST IN: RAPIDES PARISH SHERIFFS OFFICE HAVE ISSUED THE ORDER, IF DEPUTIES COME INTO CONTACT WITH “THE INFECTED’ SHOOT ON SIGHT….Lord have mercy on us all. #Covid9teen #weneedyoubradpit “. Detectives immediately initiated an investigation and identified Waylon Allen Bailey 27, of Forest Hill as a suspect. Shortly after, Bailey was located near his residence and taken into custody without incident. Bailey was booked into the Rapides Parish Detention Center in reference to One Count – Terrorism. Bailey is currently being detained at the detention center as bond has yet to be set, in reference to the charge.

Sheriff Hilton would like to again impress upon everyone that we are all in this together. As well as remind everyone that communicating false information to alarm or cause other serious disruptions to the general public will not be tolerated.

I will be the first to admit that this post is in extremely poor taste but anyone who read the entire thing probably would not believe it as it appears to be a terrible joke. The fact that he put the hashtag “#weneedyoubradpit” illustrates the point that it was in jest as this is clearly a reference to the movie World War Z.

While there were many people in support of Bailey’s arrest, others took to the sheriff department’s post to express their discontent with arresting someone over an obvious joke. Below are some of those comments calling out the RPSO for charging this man with felony terrorism:

It’s still clearly satire and there is 100 years of case law protecting this guy. Free speech is free speech.

I can’t believe he’d get arrested for an obvious joke…..this country is pathetic and apparently has a lot of very dumb people….

Definitely inappropriate for him to post false information. But charging him with Felony Terrorisim?

Meanwhile some jails are letting misdemeanor criminals out. We are in a pandemic. Jail populations are more susceptible. We don’t want to overload the hospitals… that’s the point of #flatteningthecurve…..

Terrorism charge for an obvious facebook joke?!? That’s insane! Who would even believe that anyway?!

The sheriff’s department, however, did not see the satire in the post and Bailey is currently being held in the Rapides Parish Detention Center for one count of terrorism. His bail has been set at $10,000.