Cops Chase Man Down Over an Open Beer, Execute Him With a Bullet to the Head 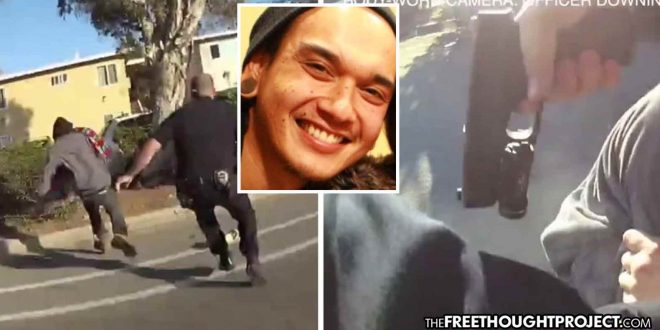 San Diego, CA — On January 24, Toby Diller made the mistake of drinking a beer in front of two San Diego cops. Because police claim the right to extort people who drink beer outside of a bar or restaurant, they decided to stop Diller. Moments later Diller would be dead having suffered a police-issued bullet to the head.

Though the incident took place over a month ago, the video was only just released this month.

On that fateful January day, police would claim that Diller was “acting erratically” and that is why they initiated the stop. However, video from a nearby security camera simply shows Diller walking down the sidewalk — harming absolutely no one — while drinking a beer.

The security footage shows police attempt to extort Diller, 31, for drinking the beer, when he takes off running.

“Hold up. Stop. Stop. Police!” an officer yells at Diller who continues to run, likely not wanting to be extorted or arrested for drinking a beer in public. Diller appears to trip and fall before being pounced on by the cops.

After the very brief foot chase, the two cops, SDPD Officers Devion Johnson and Benjamin Downing pin Diller to the ground where a struggle ensues — over a beer can. According to police, Diller grabbed one of the officer’s guns who then told his partner to shoot him.

Seconds later, we see Devion raise his gun, put it up to Diller’s head, and fire a single round, executing Diller with a bullet to his head over a stop for a beer can. Despite putting a bullet in Diller’s head, completely eliminating any chance of a threat, the officers then put the quickly dying man into handcuffs.

Though police claim Diller grabbed at Downing’s gun, none of this is evident in either of the officer’s body camera videos. Carlos Miller, with Photography is not a Crime made the observation that even if the officer’s gun did fall off during the struggle, so did one of their body cameras. Who’s to say that the officer’s belt didn’t come loose while running or wrestling a man to the ground over a can of beer.

What’s more, when police finally released the footage of the shooting more than a month later, they redacted the audio which took place immediately after the shooting. They claimed this was done because it was “disturbing.”

This segment of redaction does not contain any dialogue between the officers. It was redacted because of graphic audio that was a result of the gunshot wound to Mr. Diller. We consider that audio disturbing and its release, in this form, would be disrespectful and gratuitous.

While police may consider that particular bit of audio to be disturbing, we find the entire act of chasing down a man over a beer can and then shooting him in the head a far more disturbing notion.

After the video was released, Shawn Takeuchi with the San Diego Police Department, released a statement pointing out that “both officers are still with the department.” He also mentioned that the incident is still under investigation and is being investigated as a homicide.

“This incident is still under investigation by our Homicide Unit and has not been turned over yet to the San Diego County District Attorney’s Office for their [its] review,” Takeuchi told News 8. “The DA’s Office will examine this incident and will determine if the officers involved bear any criminal liability for their actions. In addition to the DA’s review, our Internal Affairs Unit will determine if the officers followed proper policies and procedures.”

Diller’s family have since launched a GoFundMe to pay for the funeral expenses. On the page, Toby’s older brother and sister describe their little brother as a caring person who would give whatever he had to help others.

You were the baby brother, we cherished you. I wish that we could hold on to you longer, just hug you and give all strength, courage and hope to set you free.
Toby we loved you in all your beautiful imperfections, you were and will always be my favorite human.

Below is the disturbing video showing how a stop for a can of beer in the land of the free can end with a bullet to your head.