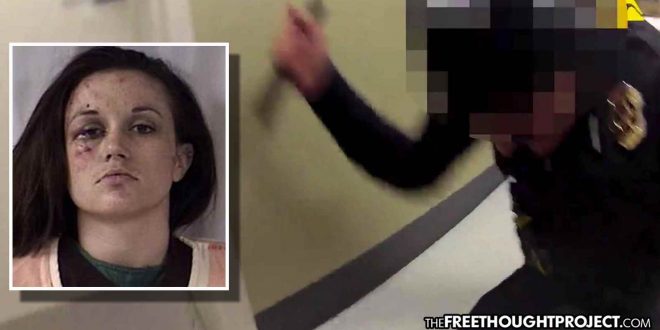 Fort Collins, CO — Natasha Patnode received word last month that she will be receiving $325,000 from the city of Fort Collins — roughly $5,300 for every baton blow doled out by a Fort Collins police officer that struck her body. She was suspected of shoplifting clothing and was nearly killed over it.

On March 29, 2018, Fort Collins police officer Todd Hopkins was called in to arrest Patnode after she was accused of stealing clothing from a Target store. Hopkins senselessly and needlessly escalated force during the arrest, which led to Patnode’s savage beating and the end of the officer’s job with the Fort Collins police department.

Prior to Hopkins arriving on the scene, Patnode was attempting to evade a loss prevention employee from Target. When Hopkins arrived, things turned violent fast. Hopkins grabbed the woman by the collar, threw her to the ground, pepper sprayed her, and began unleashing a fury of punches and baton blows in a beating that would last several minutes.

Patnode did not appear to pose a threat to the officer and simply seemed to be shielding herself from his rampage, curled up in the fetal position on the floor as this woman-beating cop laid into her.

Surveillance video showed Hopkins threw Patnode to the ground, punched her multiple times in the side while she was on the ground and struck her repeatedly with a baton while trying to handcuff her. Throughout the beating, Patnode remained on the floor in a curled position.

Five minutes after Hopkins first took Patnode to the ground, a second officer arrived on the scene. His body camera footage showed both officers yelling at Patnode to give them her second arm, which was beneath her body. Patnode said she would give it to them but couldn’t because Hopkins was sitting on her head. The second officer then Tased Patnode twice in the back.

After Patnode’s second arm was freed and officers had control of both hands, Hopkins Tasered her again. After she was handcuffed, Hopkins continued to sit on her head and punched her once because she was holding her purse.

Even after both of Patnode’s hands were behind her back, Hopkins continued to use his Taser on her, which can be seen about 8:15 minutes into the body camera footage.

“You cannot beat me like you was,” Patnode said after cops finally put the handcuffs on her.

“I can strike you, I can restrain you, I can Tase you — you were resisting arrest,” Hopkins said before threatening to taser the handcuffed woman.

“I still have my Taser probes inserted into your back, so if you go uncooperative again I’ll light you up again for five more seconds,” Hopkins said.

Patnode admitted she did steal the clothing from target and later pleaded guilty to the misdemeanor shoplifting charge. However, she was not charged with resisting arrest.

After the beating was investigated, the District Attorney claimed Hopkins did nothing wrong.

“While disturbing to watch, it should be noted that Ms. Patnode repeatedly ignored commands, refused to remove her hand from underneath her, and refused to surrender the purse, which was also underneath her,” stated District Attorney Cliff Riedel in a letter clearing the officer of criminal wrongdoing. “Those actions by Ms. Patnode only reinforced Officer Hopkins’ concerns that the suspect may have a weapon of some type in her purse.”

Amazingly enough, however, the police chief disagreed and moved to fire the officer for excessive force.

“Just because something is deemed lawful from the district attorney doesn’t mean it’s appropriate” or “in line with our training,”Fort Collins Police Services Chief Jeff Swoboda said in an interview.

After an internal affairs investigation, Swoboda said the recommendation by Officer Todd Hopkins’ chain of command was for him to be fired. However, before Swoboda could fire him, Patnode quietly resigned to avoid the discipline — a common move for cops in trouble.

David Lane filed Patnode’s lawsuit along with several others against the Fort Collins police department who has an ominous track record at best — especially when it comes to beating up women.

“My law firm has four cases pending against the Fort Collins police department for using excessive force,” Lane said in a statement provided to the Coloradoan last month. “Three of the four cases have videos of officers brutalizing women. This settlement is the tip of the iceberg and much more taxpayer money will be spent on cleaning up the messes made by the police department.”

Michaella Surat was a sorority girl who was violently slammed to the ground.  An 80-year-old Fort Collins man, Stanley Cropp, was violently tackled by Fort Collins police while walking in his neighborhood. Joe Heneghan was pepper sprayed after refusing to show his ID and denied a Fort Collins cop entry into his home. While off duty, officer Stephen Sparacio stopped Kimberly Chancellor outside of her apartment complex on October 6, 2017. He accused her of speeding and then viciously attacked and arrested her.