Cops Brag About Pulling Over Innocent Man, Stealing $40k from Him—Twitter Destroys Them 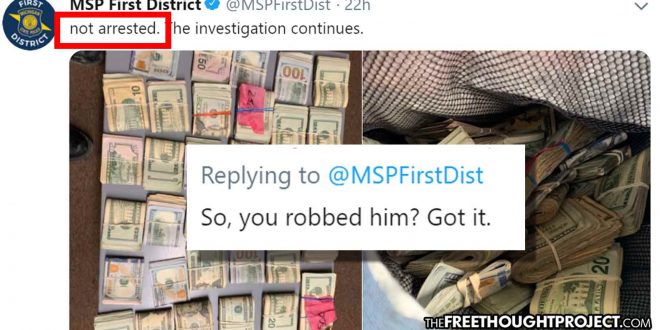 Under the fifth and fourteenth amendments, due process clauses are in place to act as a safeguard from arbitrary denial of life, liberty, or property by the government outside the sanction of law. Despite these safeguards, innocent American citizens are routinely denied their lives, liberty and property by the state. One of the most egregious examples of said denials is the controversial and unconstitutional act of civil asset forfeiture — the act of stealing a person’s property before they have been convicted or even accused of a crime.

Though it has received much deserved criticism over the years, police departments from coast to coast continue to rob people of their property without first accusing them of a crime. In what amounts to little more than highway robbery, a man travelling through Michigan this week found out just how easy it is to become a victim of “road piracy.”

On Tuesday, a Michigan State Police trooper accused an innocent motorist of following too close behind the vehicle in front of him. So, the trooper then pulled over the man to extort or otherwise launch a fishing expedition to see what he could find. Spoiler alert, he found cash.

According to police, during the stop, “further investigation” into the motorist resulted in the officer finding $40,000.00 in cash. It is important to point out that carrying cash is most certainly every free American’s right to do so — unimpeded.

Nevertheless, the trooper claimed that simply having the cash was enough of a case for him to steal it. Without charging the innocent 33-year-old motorist with a crime, Michigan State Police then robbed the man of his cash. Because he had not committed a crime and was not accused of a crime, police had nothing on which to arrest or cite the man, so he was then sent on his way — $40,000 lighter, of course.

The officers apparently thought that this is some sort of ‘public service,’ so they actually went to Twitter to brag about it.

“Trooper from First District Headquarters conducted a traffic stop for following too close on I-75 in Monroe County on March 3rd. Further investigation resulted in locating and seizing approximately $40,000.00 in cash. The driver was a 33 year old male from out of state and was not arrested. The investigation continues,” wrote the MSP First District on their Twitter page.

Trooper from First District Headquarters conducted a traffic stop for following too close on I-75 in Monroe County on March 3rd. Further investigation resulted in locating and seizing approximately $40,000.00 in cash. The driver was a 33 year old male from out of state and was

Showing just how in tune many Americans are with the idea of state-sanctioned robbery is the fact that not a single comment in their Twitter thread was in support of the MSP.

“This is so messed up. Police should not be able to do this. CHARGE HIM with a crime or give him his money back,” wrote another.

“So you legally robbed him? And you wonder why people don’t fully trust the police. Be transparent or give the guy his money back because this is theft.”

Oleksyk noted that the case has been referred to the Monroe County Prosecutor’s Office for further investigation where it will be determined whether or not the man gets his property back.

Just like that, a man who had not even been accused of a crime, was deprived of his constitutional rights and robbed by public servants on the side of the road.

Unfortunately, this is a huge problem that has been going on for decades.

The 1980’s-era laws were designed to drain resources from powerful criminal organizations, but civil asset forfeiture has become a tool for law enforcement agencies across the U.S. to steal money and property from countless innocent people.

As the case above illustrates, no criminal charge is required for this confiscation, resulting in easy inflows of cash for law enforcement departments and the proliferation of abuse. This phenomenon is known as “policing for profit.”

In the last 25 years, the amount of “profit” stolen through civil asset forfeiture has skyrocketed.

In 2008, law enforcement took over $1.5 billion from the American public. While this number seems incredibly large, just a few years later, in 2014, that number tripled to nearly $4.5 billion.

When we examine these numbers, and their nearly exponential growth curve, it appears that police in America are getting really good at separating the citizen from their property — not just really good, criminally good.

To put this number into perspective, according to the FBI, victims of burglary offenses suffered an estimated $3.9 billion in property losses in 2014 as compared to the $4.5 billion stolen by cops.

That means that law enforcement in America has stolen $600,000,000 more from Americans than actual criminal burglars.

When police surpass the criminal accomplishments of those they claim to protect you from, there is a serious problem.

The good news is that Americans are waking up to this Orwellian notion of police robbing the citizens, and they are taking a stand.

The idea of thieving cops has also united organizations on opposite ends of the political spectrum. In October 2017, the ACLU and the Koch Brothers came together to stop the inherent police theft in America.

While the police keep grabbing your property, it is important to remain vigilant. Only through a lesser ignorance and the spreading of information will we overcome this blatant tyranny. Please share this article with your friends and family to wake them up to the criminal reality that is civil asset forfeiture.