WATCH: Cop Punches Innocent Man in the Head 12 Times, Jokes About It with Fellow Cops 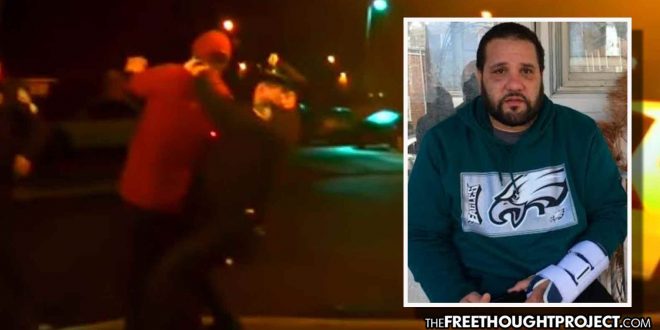 Camden County, NJ — Edward Minguela had done nothing wrong and was simply walking home in February 2018 when he was attacked by Camden County police officer Nicholas Romantino. The subsequent attack was captured on video and immediately sparked outrage. The video was so outrageous that the officer was actually arrested. However, because the American justice system is so corrupt, last year, Romantino walked free. Now, it will be the taxpayers who are held liable.

On Friday Minguela filed a federal civil lawsuit claiming excessive force was used when he was held down and repeatedly punched in the head by Camden police officer Nicholas Romantino.

In response to the lawsuit, Police spokesman Dan Keashen told NJ Advance Media that Romantino is still suspended without pay.

“The officer in question has been suspended without pay since the incident took place and the agency is currently proceeding with our (internal affairs)deliberations,” Keashen said. “Otherwise we don’t comment on pending litigation.”

In September, Romantino was acquitted despite graphic video evidence and despite the fact that Minguela was innocent. This was the second trial Romantino faced for the excessive force charges. The first one ended in a mistrial in June. This trial was about to end in a mistrial because a juror refused to acquit. However, at the last minute, that juror was replaced and a verdict reached.

“The fox has been guarding the henhouse,” said Minguela’s attorney, Devon M. Jacob, “which explains why the Camden County Prosecutor’s Office continues to pursue false criminal charges against Edward Minguela but declined to prosecute Nicholas Romantino for throwing Minguela to the ground and punching him in the back of his head 12 times.”

Rest assured that had a civilian attacked an innocent person as these Camden police officers did that night, they would have been locked away for years. However, defense attorneys and prosecutors spin a different web for juries when a police officer is involved. Instead of calling Minguela’s actions of defending himself against an unprovoked and unlawful assault, self-defense, both the defense and the prosecutors called it “resisting.” This play on words was just the beginning of the twisted web the court would spin to convince this jury.

And, as the following details illustrate, this was no ordinary trial. From the beginning it was setup to trick the jury by omitting certain facts and adding others in an attempt to paint Minguela as a dangerous criminal and make Romantino look like the victim.

Among other arguments on Romantino’s behalf, Rybeck told the jury that another Camden County police officer, Patrick O’Hanlon, had been shot and wounded during an arrest attempt about three months prior to the Fairview incident.

In that case, the suspect was lying on his stomach when he pulled a gun from his waistband and shot O’Hanlon in the thigh, Rybeck noted in a pretrial filing.

As a result of O’Hanlon’s shooting, Rybeck said police officers “were advised during their respective roll calls to be super vigilant to calls involving guns.”

Rybeck also won a ruling that jurors would not be told a gun was not found at the Fairview scene, arguing that fact was not known to Romantino during the encounter.

When a prosecution witness “still testified there was no gun,” Rybeck noted, the judge instructed jurors “not to consider whether Minguela had a gun.”

While telling the jurors not to consider a gun, the judge also allowed the prosecution to drag up Minguela’s old arrest for eluding as a means to smear the victim. And, at no time did Romantino ever have to take the stand.

From the get go, the “trial” was set up to benefit the officer, smear the victim, dupe the jury, and acquit a brutal cop. This is the justice system in the land of the free.

“We are ecstatic at the verdict. Just overjoyed at the verdict that my client was vindicated,” Romantino’s attorney, Daniel Rybeck said at the time, “Everything he did was proper.”

Apparently it is “proper” to stop an innocent man, savagely beat the hell out of him, laugh and brag about it with your fellow cops, fabricate charges, and then threaten that man if he seeks help. Sure thing, proper.

The taxpayers will now be held to the fire.

As TFTP reported at the time, on February 22, 2018, Minguela was walking home from a nearby store, and as the surveillance footage shows, he was approached by Ramantino. Officers claim they were responding to a call about a man with a gun, but Minguela had no such gun.

As the video shows, police run up on Minguela with guns drawn and he immediately complies with their orders to put his hands up. However, as they attempt to handcuff him, he appears to slightly pull away because he had done nothing wrong. That’s when all hell broke loose.

Romantino slams the non-violent man to the ground and begins punching him in the head. Boom, boom, boom, Ramantino delivers blow after blow to the head of Minguela as he yells at the man who is simply trying to defend himself from being killed by police to “put your hands behind your back!”

In total, Romantino would deliver 12 massive blows to the head and face of Minguela who is begging the officer to stop, asking, “Why you hitting me like that bro?”

After bringing Minguela to the car, Romantino pats him down—finding nothing on or near the scene. At one point, Minguela accused Romantino of kicking him after he called him a name.

After he was kidnapped and thrown in the back of the cruiser, Minguela continued to ask the driver, Officer Peter Sanchez, why he was arrested. “You’ll have to ask the officer that arrested you,” he replies.

In the video obtained through a FOIA request by NJ.com, it then shows Romantino laughing about beating the innocent man, showing off his swollen knuckles as a trophy.

“That guy. He’s always giving us a hard time, that guy,” Romantino said.

“Not anymore,” he said as his comments were met with laughter by his fellow cops, who seemed entirely resolute in the notion of attacking, beating, and kidnapping an innocent man.

Minguela says this forced him to forgo the treatment and he left. However, on the advice of an attorney, Minguela went back to the hospital the next day and was treated for a concussion and a fractured wrist.