Scientists to hunt tornadoes with microphones used to listen for NUKES 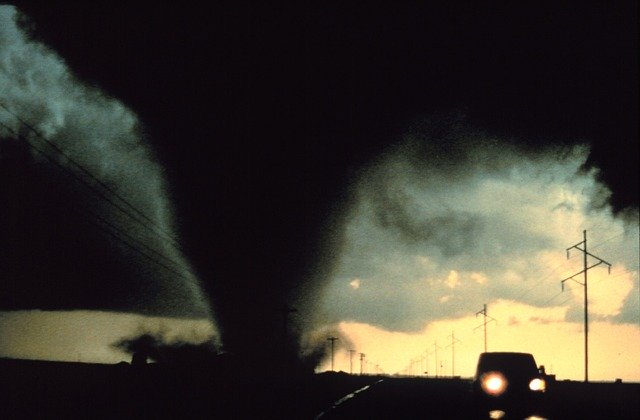 Meteorologists have long-struggled to predict when and where tornadoes will strike, but now scientists testing specialized microphones used to detect illegal nuclear weapons tests believe they may have a way to track the twisters.

Tornadoes can be a scourge, wreaking havoc and misery on populations with little to no prior warning because of how incredibly difficult they are to predict and track with any high degree of accuracy.

But now, Roger Waxler of the University of Mississippi and his team at the National Center for Physical Acoustics think they have the answer: microphones that can hear infrasound, or sound below the range of human hearing, emitted by tornadoes which can be picked up more than 50 miles (80 kilometers) away.

At present, meteorologists look for strong updrafts and instability in the lower levels of a storm system, as well as the telltale curling of the precipitation field on satellite radar, to indicate roughly where a tornado is in the process of forming and sound the alarm.

Despite advances in technology, however, eyewitness accounts are still the most reliable and most concrete way of confirming the formation of cyclones, though this does nothing to assist in predicting when or where they will touch down and poses an obvious threat to the lives of the eyewitness.

In the past few years, Waxler and his team deployed a network of infrasound microphone arrays across northern Alabama, having already developed the specialized mics to help the US government enforce the Comprehensive Nuclear Test Ban Treaty. The team’s arrays picked up the formation of eight tornadoes on March 19, 2018 alone, using only their incredibly low-pitched hum (1-10 Hz).

Thanks to additional National Oceanic and Atmospheric Administration (NOAA) funding, Waxler and his team are now able to expand their network into parts of Mississippi and Louisiana and fine tune their already promising technology.

Estimates for damage caused by tornadoes in the US run as high as $19.5 billion for 2019 alone. The cyclones can also be fatal with preliminary data indicating that 43 people were killed by the whirlwinds in the US last year. Despite the dangers the US National Weather Service still reports at least a 50 percent false alarm rate for issued tornado warnings.