Watch a Violinist Play While Surgeons Remove Tumour From Her Brain 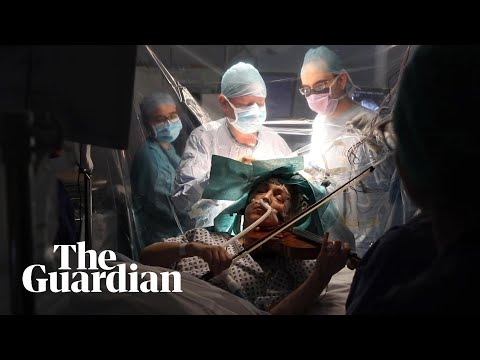 A violinist helped surgeons avoid damage to her brain during surgery to remove a tumour by playing her instrument, the UK hospital where she underwent the innovative procedure said.

Surgeons came up with the novel approach to ensure that areas of Dagmar Turner’s brain responsible for intricate hand movements were not affected during the precision procedure.

Turner, a 53-year-old musician with the Isle of Wight Symphony Orchestra in southern England, was diagnosed in 2013 with a slow-growing tumour after suffering a seizure during a concert.

She eventually sought surgery. Professor Keyoumars Ashkan, consultant neurosurgeon at King’s College Hospital in south London, hit on the plan to protect vital cells located in the right frontal lobe of her brain.

The area is close to the part of the brain that controls the micro-movements of the left hand required to regulate a violin’s pitch and timbre.