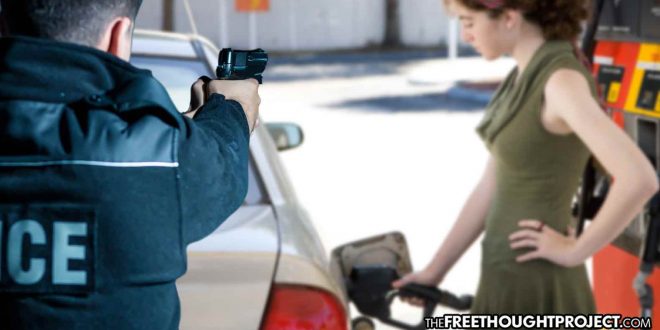 In the land of the free, there are still lawmakers who push for the most ridiculous laws despite there being no benefit to the citizens whatsoever. In fact, a proposed Bill in Illinois will actually hurt citizens and likely lead to fines or other punishment if they simply try to pump their own gas. Seriously.

Rep. Camille Lilly (D–Oak Park) introduced the legislation earlier this month. It is nothing short of the full force of the nanny state coming to fruition.

“No gas may be pumped at a gas station in this State unless it is pumped by a gas station attendant employed at the gas station,” reads the Gas Station Attendant Act.

Lilly had no problem defending her bill, but after it was proposed, she received so much “really aggressive” outrage that she had to publicly issue a statement to clarify.

“HB4571 is concept legislation that creates safety and convenience at the pump. It is not intended to pass as is. The bill seeks to create options for self-service, service by gas station attendant, and jobs. Input is valuable to shape into legislation the people of IL desire,” the lawmaker tweeted.

HB4571 is concept legislation that creates safety and convenience at the pump. It is not intended to pass as is. The bill seeks to create options for self-service, service by gas station attendant, and jobs. Input is valuable to shape into legislation the people of IL desire.

The completely ignorant sentiment behind this bill shows how detached many lawmakers are from the real world. Gas stations around the country have opted out of full service gas pumps because no one was using them.  As Reason points out, the market has already proven just how much people don’t want this “service.”

While drivers in the states that still mandate full-service like to talk up the convenience of not having to get out of their car, the fact that the practice doesn’t persist when it’s not mandated is proof enough that people are not willing to pay the costs of this higher level of service.

The Illinois Policy Institute, a think tank, notes that motorists in that state are already paying the third-highest gas taxes in the country.

Self-service stations can also create convenience in other ways. The fewer staff members needed to man the pumps mean businesses can reassign employees to manning registers, making food, or performing other tasks their customers value more.

As TFTP previously reported, Oregon and New Jersey have similar idiotic laws on the books. Oregon overturned some of their ridiculousness in 2018 by allowing towns with a population fewer than 40,000 people to pump their own gas.

Showing just how detrimental these nanny state laws are to society, when Oregon “legalized” pumping your own gas, there was reported fallout.

Y'all they were serious…I thought it was a joke but I'm shocked! 😮😮😮🤨 #confused #OregonGasCrisis pic.twitter.com/CuHilLlXqT

The people had gotten so used to the lack of freedom when pumping gas that they actually expressed anger in getting more freedom. When the CBS affiliate in Medford, Oregon, posted a photo on Facebook, asking if residents supported allowing self-service gas stations statewide, the responses were alarming.

“I think it could be an option, but the elderly and disabled need help. And sometimes you are going somewhere dressy or important and you don’t want to risk getting gas on you or the odor of it. It also creates jobs to have somebody do it. we pay a lot for gas, we shouldn’t HAVE to pump it,” Jan Norton wrote.

Sharlette Case claimed she supports making it illegal to pump your own gas because it creates jobs, and she also shared the fear of spilling gas, and having to deal with the smell for the rest of the day. “No, it’s a job creator,” she wrote. “There’s so many people out looking for work. This will help. Plus I don’t want to smell like gas when I go to work.”

“I don’t even know HOW to pump gas and I am 62, native Oregonian . . . I say NO THANKS! I don’t like to smell like gasoline!” Sandy Franklin replied.

Tina Good also shared the fear of spewing gas all over when attempting to fill up her car, and having to deal with the smell. She even argued that pumping your own gas should be illegal because “many people are not capable of knowing how to pump gas.”

“Not a good idea, there are lots of reasons to have an attendant helping, one of they need a job too,” Good wrote. “Many people are not capable of knowing how to pump gas and the hazards of not doing it correctly. Besides, I don’t want to go to work smelling of gas when I get it on my hands my hands of clothes. I agree, very bad idea.”

The only reason Oregon residents have not been pumping their own gas is that their state’s government said it was “illegal” to do so. Therefore, the state has cultivated generations that have never learned how to do a simple task that was being accomplished by the rest of the country. Instead of feeling empowered by this new freedom, residents are resorting to fear. This is the tragic state of affairs in the land of the free.