WATCH: Mom Brings Child to Hospital for Help, But He Was Beaten and Arrested Instead 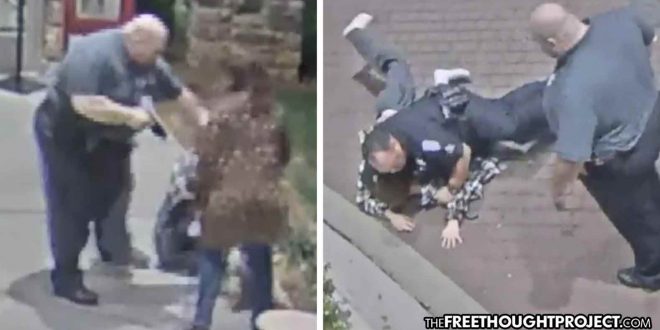 Lincolnton, NC — A Lincolnton mother found out the hard way what TFTP has consistently reported over the years. Those who are suffering from mental health issues are uniquely susceptible to police brutality and an escalation of the use of force.

Long’s son was reportedly angry and didn’t want to be at the hospital. It was just after midnight on December the 8th when the family arrived. Long asked for security to assist her with her son. But instead of kindness and compassion, less than one minute after an Atrium Health security guard arrived, Long’s son was violently thrown to the ground and threatened with a taser.

“At no point did they tell him to put his hands behind his back, to stand still, they never tried to deescalate the situation. They just immediately went for full-blown physical force,” Long said.

The security guard grabbed the teen by the head. The frail teenager reacted to being assaulted by throwing a few powerless punches in the direction of the guard who apparently weighs several hundred pounds. The guard then threw him off the sidewalk and into the grass. Immediately, the guard went for his taser and threatened to taser the kid. We’re sure that electrocution was not the kind of shock treatment the family was likely hoping to receive from the hospital.

After a second security guard arrived, and while the mother’s back was turned, he grabbed the kid by the neck, leg tripped him, and threw him to the ground, causing the kid to bleed profusely from his mouth. Both guards then got on top of him, tasered him twice, and held him there until police arrived.

Once Lincoln County deputies arrived, things did not get any better for the boy. Even though he was sitting down on the curb and in handcuffs, he started spitting bloody spit at the cops. One of the cops lost all control and punched the handcuffed teen in the face twice before being restrained by a fellow cop who actually had to take him to the ground to restrain his fellow boy in blue. The cop who hit the handcuffed teen in the face was later identified as Justin Polson.

Long recalls the helpless feeling of being able to do nothing to help her son prevail against heavily armed cops and security guards.

“I was in shock! I didn’t know what to do…I was just kind of helpless to do much of anything,” she said.

Sheriff Bill Beam completely denied Deputy Polson hit a handcuffed teen in the face after being spat upon. Beam was asked by a WBTV reporter if that action was an “appropriate use of force.” Beam adamantly denied the fact his deputy punched Long’s son in the face.

Long’s son spent 8 days in juvenile detention and has been charged with several misdemeanor’s and at least one felonious assault on a police officer that the department is hoping will stick. Depending on which class of assault Long’s son is convicted of, he could end up spending more than five years in prison for assaulting the officer, should a jury convict him.