Oregon: 5 Years In Prison For Visiting A Library? 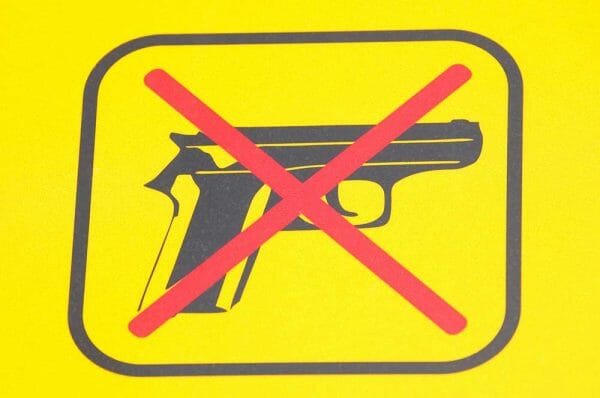 This alert contains info on two bills. Please be sure to see the info on the second bill SB 1538 which could send you to prison for 5 years.

Gun rights supporters greatly outnumbered the Bloomberg shills who came to testify in opposition to your rights and common sense. We are grateful for everyone who showed up, testified, or submitted testimony. You are heroes.

One of the bill’s sponsors, Janeen Sollman made the bizarre claim that a law forcing people to render their self-defense firearms useless was like Oregon’s seat belt law. A far more accurate analogy would have been if Oregon had a law that prohibited you from using a seat belt until a crash was already about to happen. But do not expect reason from the twisted minds of the gun grabbers.

Oregon’s one-trick pony, Ginny Burdick, testified that the gun owners in her district strongly supported locking up their guns and being responsible for the misuse of guns stolen from them.

In what was clearly a surprise to the Republican members of the committee, an amendment had been submitted.

The “dash-1” amendment removed some of the most onerous parts of the bill but retains most of the worst of the bill.

1) It still mandates trigger or cable locks which are extremely dangerous and can cause unintended discharges.
(Placing a trigger lock on a loaded gun is very dangerous but even when placed on an unloaded gun they do not prevent the gun from being loaded and a round being chambered and any movement of the lock can still result in the gun firing.)

2) Because it mandates trigger locks it is still unconstitutional under Heller vs District of Columbia.

3) It still contains “strict liability” language which, as we heard at the hearing, means a person can be held liable for another person’s misuse of a firearm no matter how much they may have (in good faith) attempted to comply with the law.

4) The amendment still has no protections for people who store their firearms, locked, in a building other than a “dwelling.”

5) The amendment still contains language that makes it impossible to comply with the bill. Please see Section 3 (1) (b) (A). If ANY means exists to defeat a lock, the gun is not considered secured. Of course, there is no lock that can’t be defeated. Not even safes.

6) The amendment still prohibits the transfer of firearms to minors, even for organized shooting events, unless the minor has a “youth hunting license.” Section 6 (4)(a)(B)

Because the amendment still requires an adult to assume complete “strict liability” for any minor to whom a firearm is “transferred” at a sport shooting event, the amendment still devastates the very kinds of programs that introduce young people to safe firearms handling.

While OFF had a copy of the “dash-1” amendment before the hearing, virtually no one else (including legislators) did, so almost no one could comment on it. The amendment is a “gut and stuff” which means it essentially replaces all the language in the bill.

On February 10th 2020, the House Judiciary Committee will be holding another hearing on HB 4005, apparently to address the amendment no one knew about. But no public testimony will be allowed.

The “invited” testimony will be by Jessica Minifie who is the person who wrote the bill and the amendment so it remains to be seen if we will be getting any real explanation about some of the aspects of the proposed legislation that make no sense.

Keep in mind, amendments can be added at any time and even if they completely change the nature of the bill you will not be allowed to testify on the final product before it is voted on in the house where it originated. It’s a game designed to keep those pesky voters out of the loop.

Like the “informational” hearing on the 10th, the public may attend but will not be permitted to testify.

Work sessions are where amendments are adopted and the final version is voted to the full House floor.

Also on February 12, the SENATE Judiciary Committee will be holding a public hearing for SB 1538. You can read the text of SB 1538 here.

The short version is this; under this bill, any school or local government body can declare their property and surrounding property off-limits to CHL holders. This is Burdick’s dream child and a bill she has introduced before.

Here is what’s important to know. If you, as a law-abiding concealed handgun license holder, go into any building controlled by any school or government entity that has declared themselves off-limits, you will face 5 years in prison. That’s five years for doing something you may have done lawfully, peacefully, while threatening no one, your entire adult life.

These are the buildings YOU pay for. And the reason for this insane new law? Because peaceful, law-abiding gun owners offend Ginny Burdick.

While gun owners have become accustomed to facing legislation designed to eliminate their rights, rarely have they faced legislation that is a product of such mindless, blind hatred.

What today is a lawful, common, and unremarkable, tomorrow could send you to prison for far longer than Oregon imprisons many violent rapists. This is the heart of Oregon’s Democrat Party today.

The hearing for SB 1538 will be Feb.12th at 8 am in Room 50. Rest assured legislative staff will send a warning to all employees of the Capitol that gun owners may be coming to the building and to contact the State Police if they feel “threatened.”

This has become standard practice in spite of the perfect behavior of gun owners at all Capitol events.

The “work session” for this monstrosity will be the following day Feb 13th in Room C at 8 am. (All dates are subject to change.)