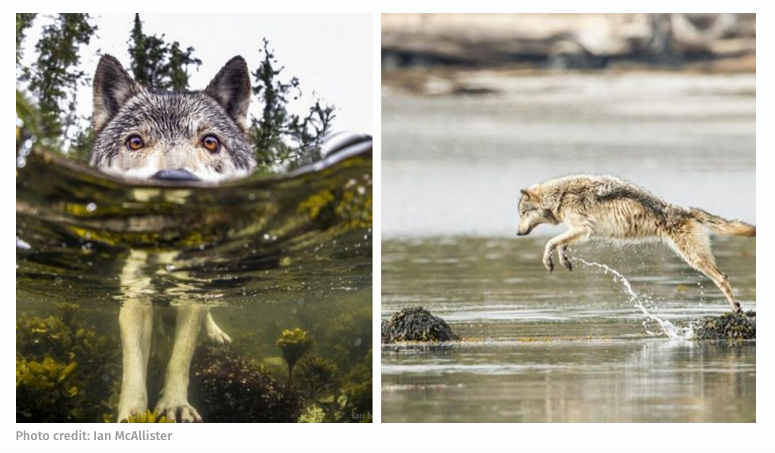 The documented flora and fauna on Earth is truly astounding, having evolved from minuscule cells over millennia into the plants and animals we have today, estimated by biologists to be over 8.7 million species.

Although approximately 1 million new species are discovered every year, it is likely that millions more remain undiscovered. In the circle of life Mother Nature created, each found the perfect place to evolve and thrive and contribute to the wellbeing of the whole—resulting in a diversity of species that boggles the mind.

Unfortunately, the evolution of Homo sapiens was too successful, resulting in the continuous extinction of many species and putting many more at risk with the destruction of natural habitat, over fishing, hunting, and pollution.

Also under threat are the rarely seen and little known sea wolves, living in isolation in a 21 million acre area, seen as a “bastion of biodiversity” along the Pacific coast of British Columbia. Sea wolves are different from other wolves who have diverse habitats to live and hunt which include the tundra, woodlands, grasslands, forests, and deserts.

To gain scientific understanding of “Canada’s newest marine mammal” and create awareness of the fragility of the sea wolves’ existence, Chris Darimont from the Raincoast Conservation Foundation developed the Rainforest Wolf Project.

Ian McAllister, award-winning photographer and Executive Director of pacificwild.org, and Canadian wolf biologist Paul Paquet started studying sea wolves in the early 2000s and has provided significant facts about these amazing animals over the past twenty years.

Sea wolves are marathon swimmers, often crossing miles of ocean between islands as they hunt. Their diet consist mostly of salmon but they also hunt seals and river otters and feast on barnacles, clams, herrings, and whale carcasses.

“There’s little doubt these wolves once lived along Washington State’s coast too. Humans wiped them out. They still live on islands in southeast Alaska, but they’re heavily persecuted there,” Paquet said.

“We know from exhaustive DNA studies that these wolves are genetically distinct from their continental kin. They are behaviorally distinct, swimming from island to island and preying on sea animals. They are also morphologically distinct—they are smaller in size and physically different from their mainland counterparts.”

To fully capture these magnificent animals in their natural habitat, McAllister swam towards the wolves as they were swimming in his direction, getting close enough to hear them grunting into his snorkel. He took several photos before he moved back into deeper water.

The extraordinary photos shown here make up part of a series from the book The Sea Wolves, Living Wild in the Great Bear Rainforest, by authors Ian McAllister and Nicholas Read. The book highlights the significance of saving the Great Bear Rain forest, home of several unique creatures.