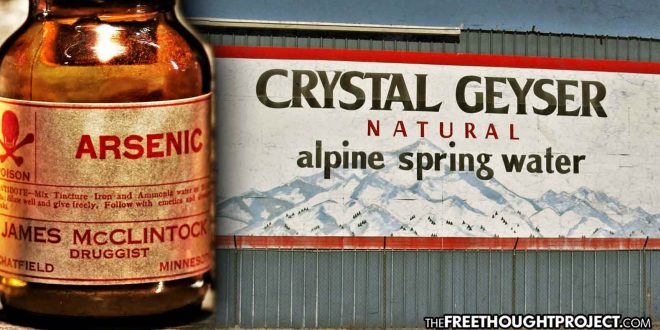 Crystal Geyser Natural Alpine Spring Water’s bottled parent company, CG Roxane, LLC, pleaded guilty to one count of unlawful storage of hazardous waste and one count of unlawful transportation of hazardous material on January 9th. Yet, to date, not one person has spent one night in jail for releasing thousands of gallons of arsenic into California’s wastewater system.

Elemental arsenic and arsenic sulfate and trioxide compounds are classified as “toxic” and “dangerous for the environment” in the European Union under directive 67/548/EEC. The International Agency for Research on Cancer (IARC) recognizes arsenic and inorganic arsenic compounds as group 1 carcinogens, and the EU lists arsenic trioxide, arsenic pentoxide, and arsenate salts as category 1 carcinogens.

This extremely dangerous and potentially deadly practice of dumping the arsenic into the California ecosystem has essentially gone unpunished.

The company earns nearly $50 million per year in revenue from its spring water but was slapped on the wrist, some might say, with a $5 million penalty for discharging arsenic tainted water back into the ecosystem. The legal problems started for Crystal Geyser when it sourced spring water from the Sierra Nevada Mountains nearly two decades ago.

That water was and still is poisoned with arsenic as is much of the water in Western states. The company used sand filters to remove the arsenic. But in an effort to increase the filters’ effectiveness the company washed out the sand filters with chemicals, removing the build-up of arsenic, and releasing it into an outdoor holding pond. Yes, that’s right folks. They filtered out the arsenic, and then put it right back into the ecosystem in a concentrated form.

People Magazine published the news accompanied with a press release by the U.S. Attorney assigned to the case:

To maintain the effectiveness of the sand filters, CG Roxane back-flushed the filters with a sodium hydroxide solution, which generated thousands of gallons of arsenic-contaminated wastewater.

The company kept all of the arsenic in the holding pond for 15 years at which time it was told it would have to dispose of the arsenic-filled wastewater, a hazardous material which could kill people. But it was ultimately how the company disposed of the arsenic which got the private company into trouble with the government. According to the press release by the U.S. Attorney:

The arsenic-contaminated wastewater was ultimately transported to a Southern California facility that was not authorized to receive or treat hazardous waste…As a result, more than 23,000 gallons of the wastewater from the Arsenic Pond allegedly was discharged into a sewer without appropriate treatment.

The corporate crime has largely gone unpunished as no single employee has been held criminally responsible for enriching the naturally-occurring arsenic levels in the wastewater and releasing all 23,000 gallons into the sewer. With a fine as low as $5 million, a fine which could be disputed at a later date presumably with a new trial, the company could conceivably be laughing all the way to the bank.

To put it into a different perspective, if a citizen had poisoned the Californian wastewater with arsenic, that person, if convicted, would spend the rest of his life in jail convicted of domestic terrorism, conspiracy, and a whole host of other crimes. The fact no one is going to prison serves to illustrate how corporate free passes work.

That’s right America. A company who promises to give you the cleanest, purest, mountain spring water, took out the good stuff, sold it to you for a profit, then dumped the poisons found in the water right back into the wastewater system and no one went to jail, no one paid a high price, and the privately held company will just keep on getting wealthier at the public’s expense.