Man Keeps Rock For Years, Hoping It’s Gold. It Turned Out to Be Far More Valuable

In 2015, David Hole was prospecting in Maryborough Regional Park near Melbourne, Australia.

Armed with a metal detector, he discovered something out of the ordinary – a very heavy, reddish rock resting in some yellow clay.

He took it home and tried everything to open it, sure that there was a gold nugget inside the rock – after all, Maryborough is in the Goldfields region, where the Australian gold rush peaked in the 19th century.

To crack open his find, Hole tried a rock saw, an angle grinder, a drill, even putting the thing in acid, but not even a sledgehammer could make a crack. That’s because what he was trying so hard to open was no gold nugget. As he found out years later, it was a rare meteorite.

“It had this sculpted, dimpled look to it,” Melbourne museum geologist Dermot Henry told The Sydney Morning Herald.

Unable to open the ‘rock’, but still intrigued, Hole took the meteorite into the Melbourne Museum to be identified.

“I’ve looked at a lot of rocks that people think are meteorites,” Henry told 10 daily.

In fact, after 37 years of working at the museum and examining thousands of rocks, Henry explains only two of the offerings have ever turned out to be real meteorites.

This was one of the two. 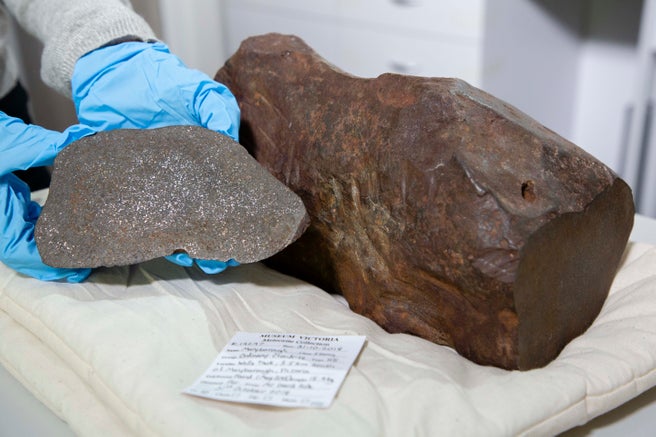 “If you saw a rock on Earth like this, and you picked it up, it shouldn’t be that heavy,” another Melbourne Museum geologist, Bill Birch, told The Sydney Morning Herald.

The researchers have recently published a scientific paper describing the 4.6 billion-year-old meteorite, which they’ve called Maryborough after the town near where it was found.