HODGES: How An EMP Attack Could Turn Into An Extinction Level Event

12/29/2018
Given what I learned about the strange events surrounding the Grid Ex II drill and the apparent Chinese takeover of our solar energy, plus the fact that a Chinese solar energy zone is located near the Palo Verde Nuclear Power Plant, as well as several other power plants, I am a little more than suspicious about the lack of preparation. This skepticism is fueled by the rejection of the previous relentless efforts of former Arizona Congressman Trent Franks and his attempts to bring the to national attention the vulnerability of America’s grid due to a EMP attack. Where the investigation came up short was in the area of a widespread and catastrophic nuclear meltdown of our nuclear power plants for a variety reasons. The most catastrophic and deadly reason would be related to a prolonged power outage.

Subsequently, I decided to examine the likelihood of a monumental nuclear catastrophe in this country due to a take down of the power grid. All discussions about a catastrophic failure of any nuclear facility must begin with a cursory analysis of what we have learned about the Fukushima event. Does anyone else smell the presence of the Chinese through all of this given what we know about Chinese Solar Energy Zones in the United States and their proximity to several nuclear power plants? And when we couple our suspicions of the Chinese, we must add in the United Nations. The United Nations have shown surprising and concerning interest in surviving a grid down scenario. This will be covered in this report as well.

The UN and Their EMP-Proof Communications Equipment

To set the tone for this information, I want to remind the readers of a quote made famous by the ultimate globalist, Henry Kissinger.

“Today Americans would be outraged if U.N. troops entered Los Angeles to restore order; tomorrow they will be grateful! This is especially true if they were told there was an outside threat from beyond whether real or promulgated (EDITOR’S NOTE; IE–FALSE FLAG), that threatened our very existence. It is then that all peoples of the world will pledge with world leaders to deliver them from this evil. The one thing every man fears is the unknown. When presented with this scenario, individual rights will be willingly relinquished for the guarantee of their well being granted to them by their world government.”

– Henry Kissinger in an address to the Bilderberger meeting at Evian, France, May 21, 1992.

It is the contention of the CSS, that a planned grid down scenario is planned and UN has already been prepositioned to respond under the Kigali Principles which will allow the UN to move in and declare martial law. 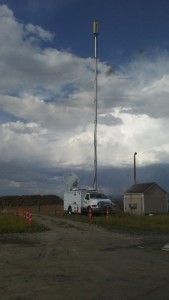 The publishing of this photo led to an explosion of similar photos being sent to the CSS as well. Here is an example of what was installed in Aurora, Colorado.

The flow of information in this area has not ended. Yesterday, Paul Martin informed me that he, once again, received information from our intelligence source. This time, the information indicates that Wyoming is planning for a long-term power outage. This parallels what is going on in other states  (eg Colorado, Minnesota, New Jersey, etc). The title of the report is as follows:

Paul and I discussed some of the contents of the report but it is largely a rehash of the recent FEMA warning that Americans should be prepared to without electricity for six months.

In yesterday’s article, I discussed how people who die following a prolonged grid down . What I intentionally left out is what could happen to our nuclear power plant industry. This would be the proverbial kill shot. If the following does occur, this marks the end of the US government, the Constitution and national sovereignty. It could very well mark the end of humanity as we presently understand it.  In order to take stock of the most deadly threat facing America, we must start with Fukushima.

Fukushima is often spoken of by many, as a possible extinction level event because of the radiation threat. Fukushima continues to wreak havoc upon the world and in the United States as we are being bathed in deadly radiation from this event.