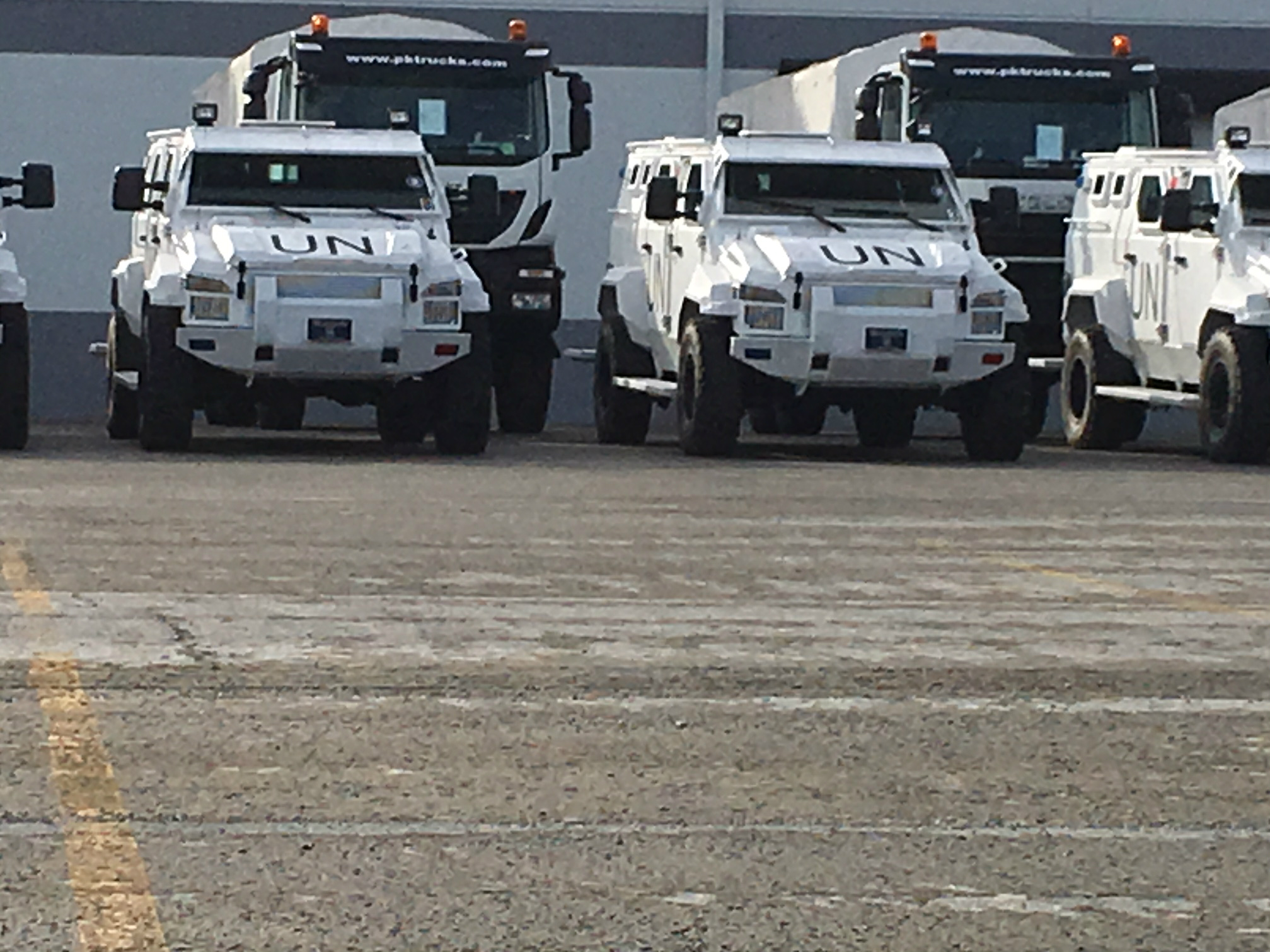 I went to investigate the United Nations vehicles in Hagerstown, Maryland…Here is what I found 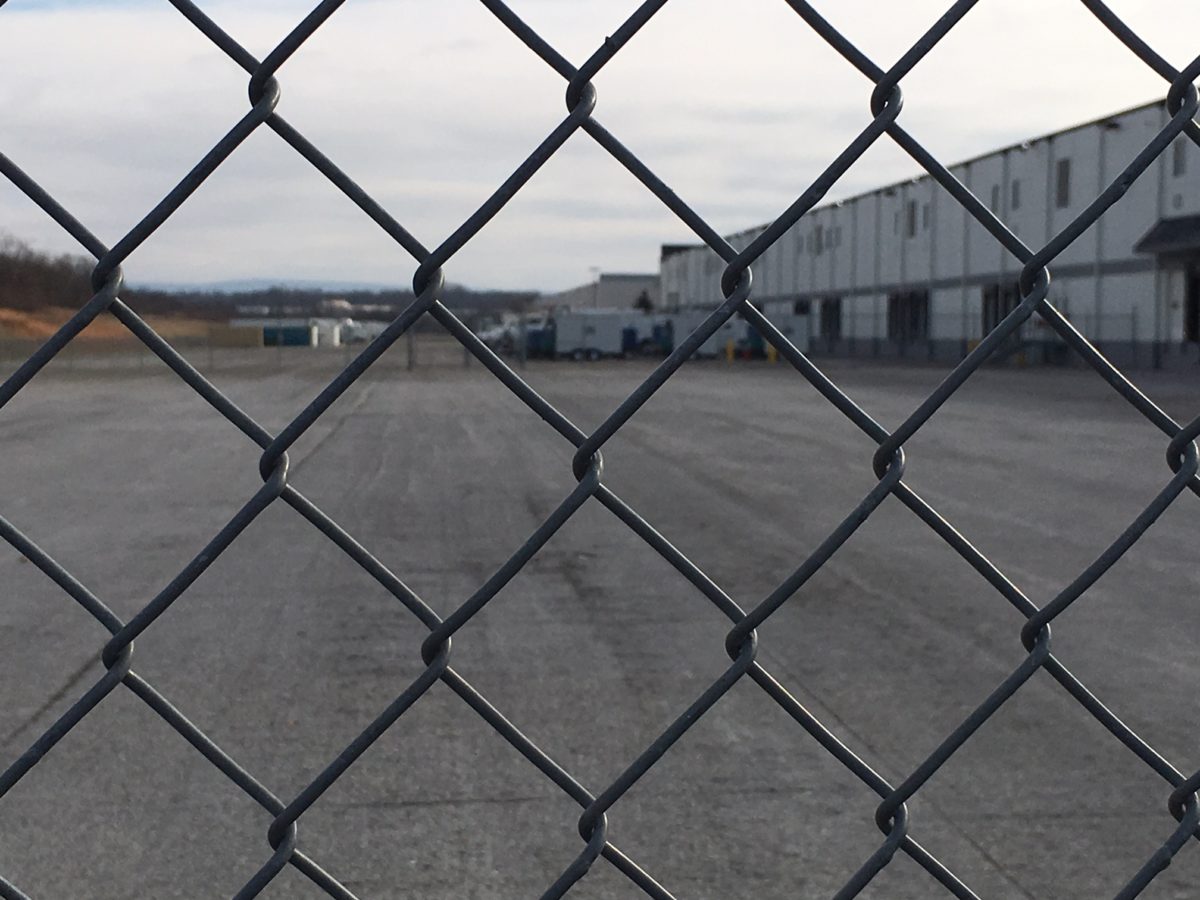 Over the Christmas holiday my wife and I went back to Maryland to visit family, and like any other reasonable person, I decided to drive an hour and a half north-west to Hagerstown in hopes of capturing a glimpse of the much-talked-about United Nations vehicles stored in this secret Maryland facility.

Here is what I found….

It’s Christmas Eve, and I’m up early, My wife has a day planned with her mother, and family festivities don’t start until late this afternoon, which leaves me plenty of time to update the website and make the trip to Hagerstown. Unfortunately, this will be a solo mission as none of my friends and family share the same passion as me or want to risk getting arrested on Christmas Eve.

Sometimes it sucks to be ‘woke.’

I know this area very well. Hagerstown is just a quick trip up 70 West; this two-lane drag has a notorious workday commute as most sensible people have escaped the crime-ridden Baltimore County in exchange for this peaceful country oasis. Luckily, traveling today will be a breeze.

As I inch closer to my destination, 11841 Newgate Boulevard, I see a sprawling backroad scattered with commercial warehouses, a FedEx hub, a DHL hub and a Tempur Sealy distribution center.

Upon arrival, I’m greeted by a vast chain linked fence with dozens of “No Trespassing” signs posted. The parking lot is empty which is expected on Christmas Eve, but after driving to the front of the building I notice that the entrance gate is unexpectedly unlocked and wide open. Yes, you read that right, the gate was wide open. I could have easily driven my car or walked right through and had unprecedented access to the outskirts of this facility. Since I was by myself and didn’t have anyone to watch my back (and more importantly it was Christmas Eve and didn’t want to inconvenience my family with the possibility of getting arrested) I decided it was best not to go in. 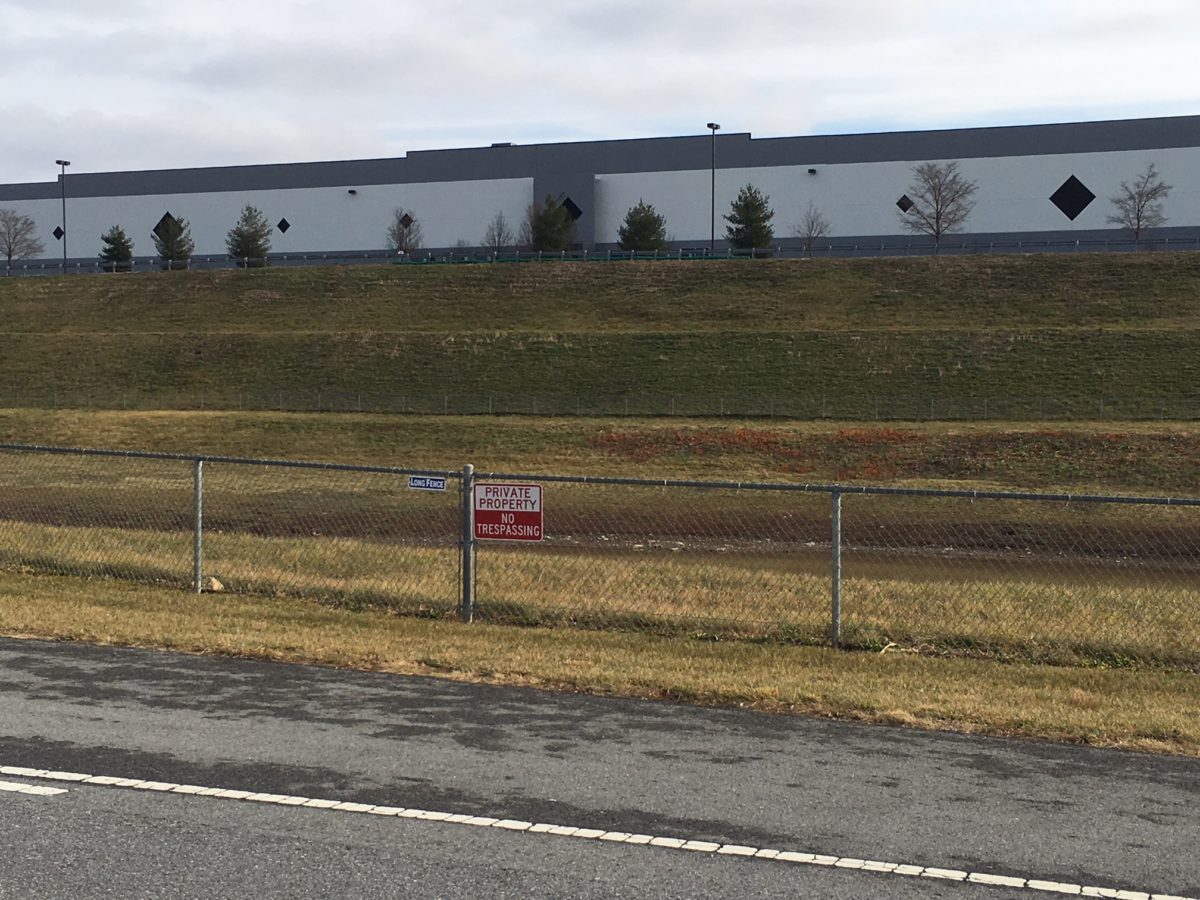 Instead, I make my way around the perimeter of the building hoping to find the highly-discussed U.N. trucks, but I only seem to find a never-ending chain length fence and a pile of unidentified plastic objects in the parking lot. 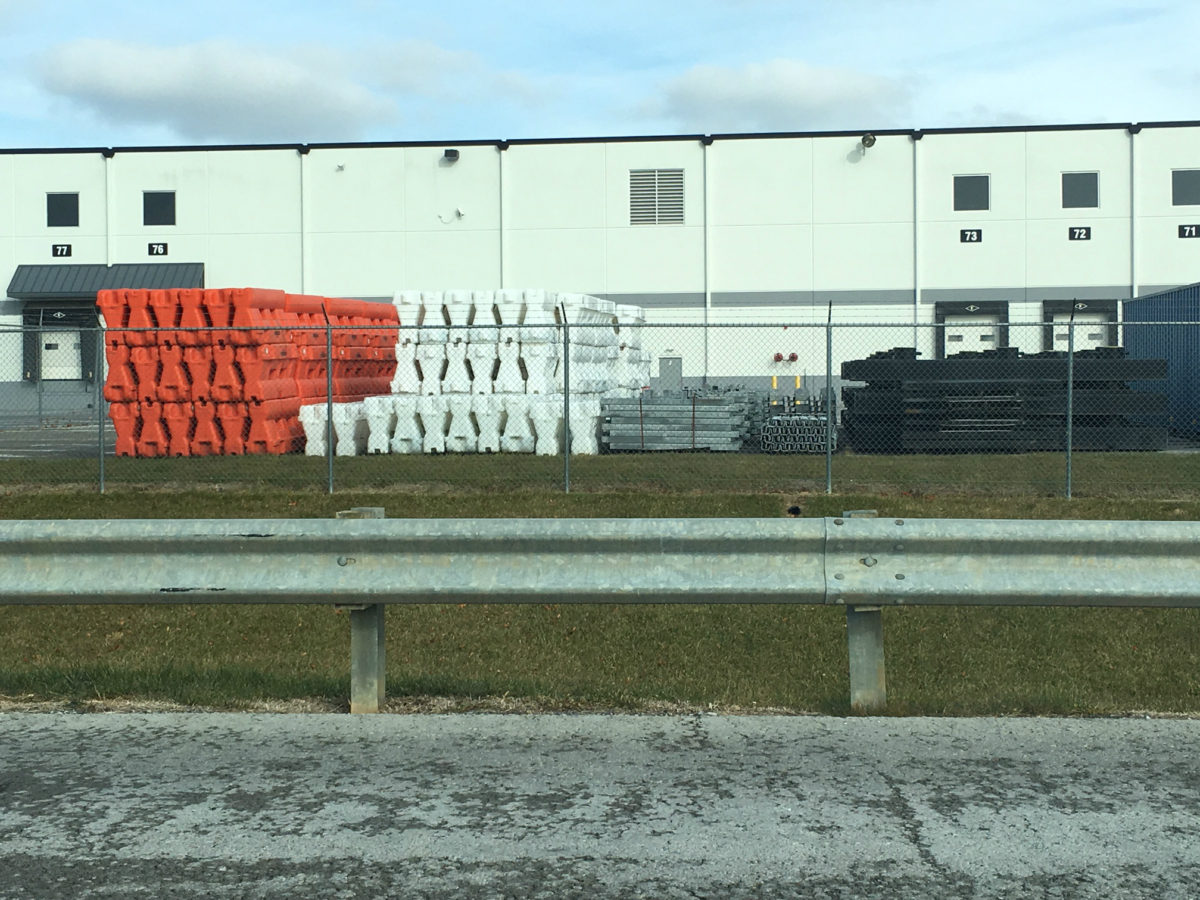 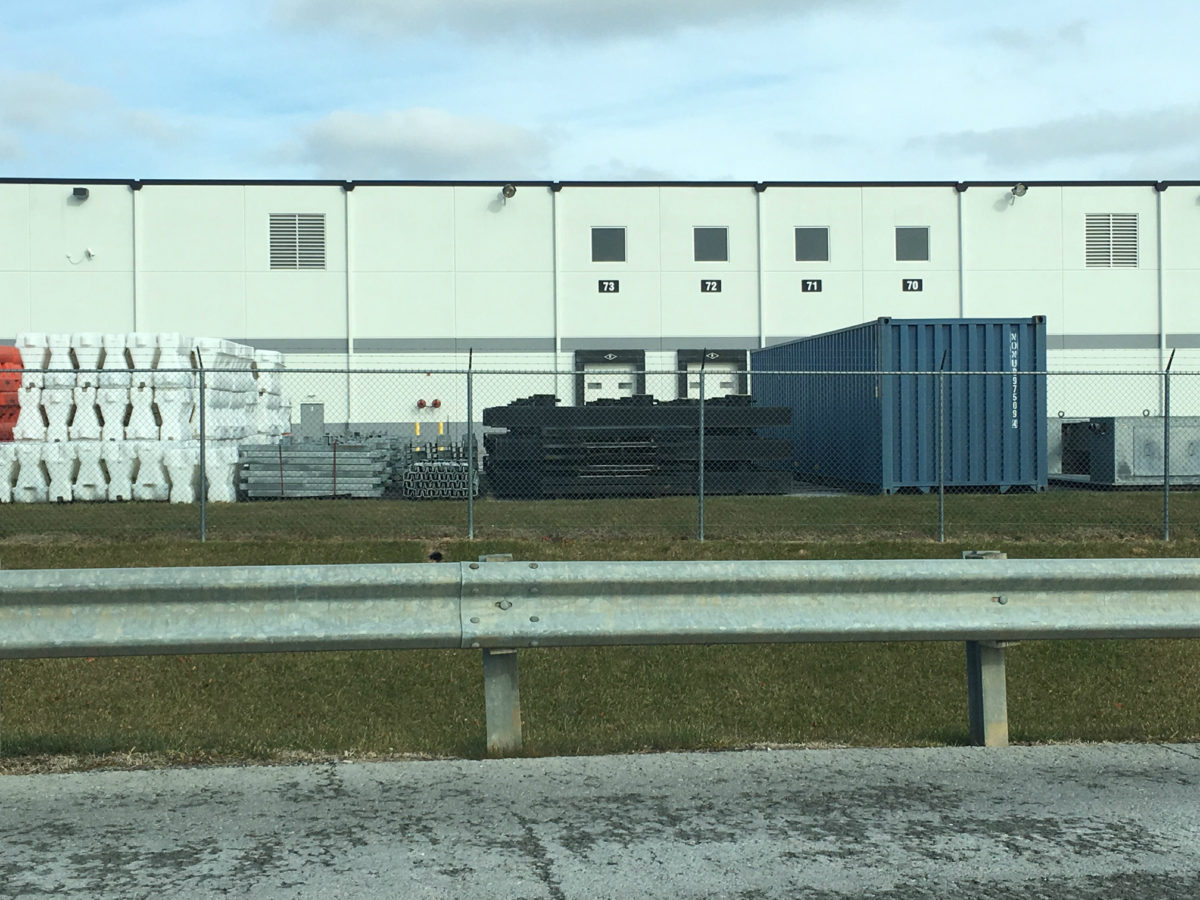 I finally reach another gate, but this time its locked and a little more intimating. 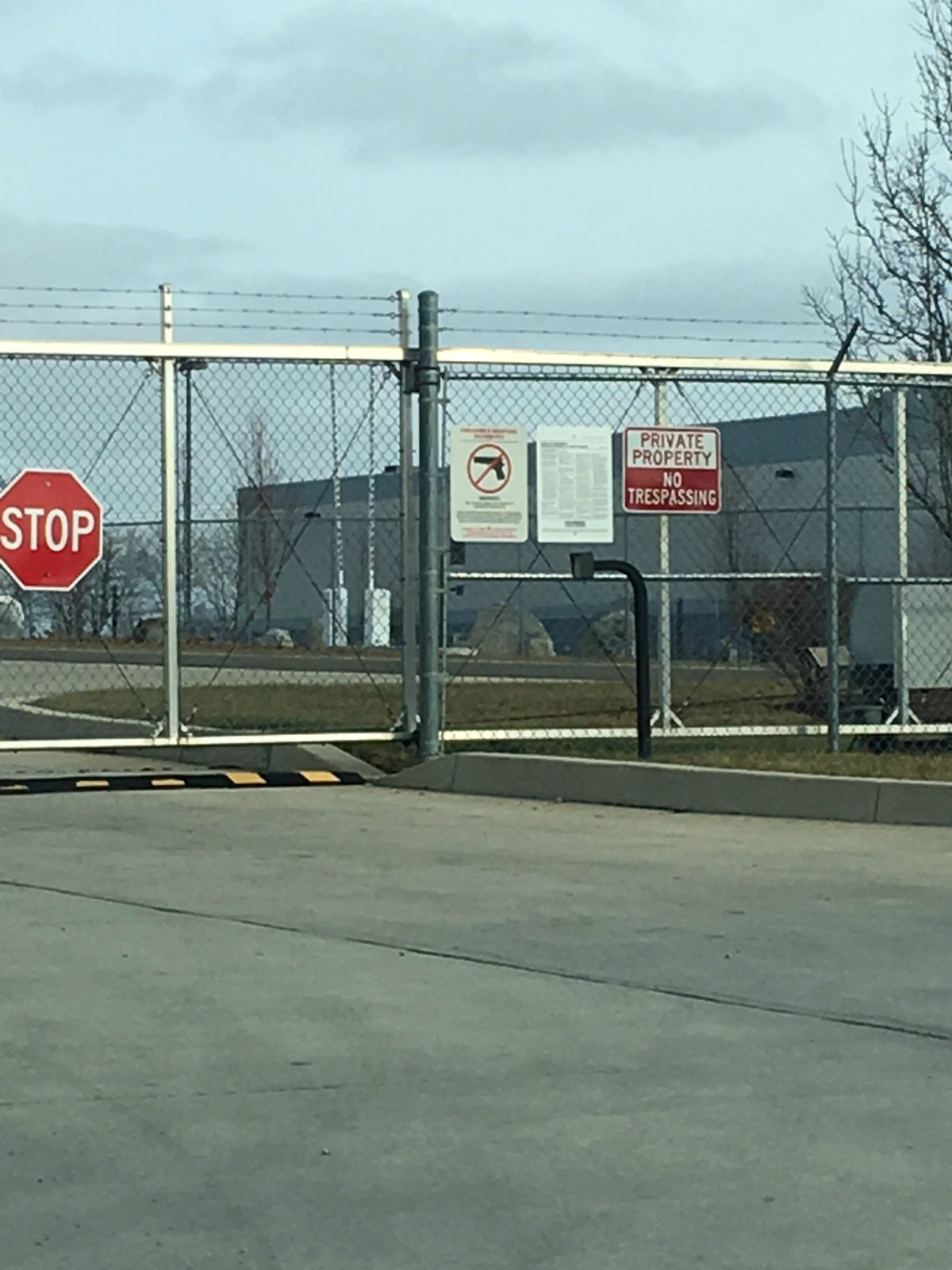 As I continue to survey the perimeter of this fortress I notice security cameras on the corner of the building. I know I’m getting closer. 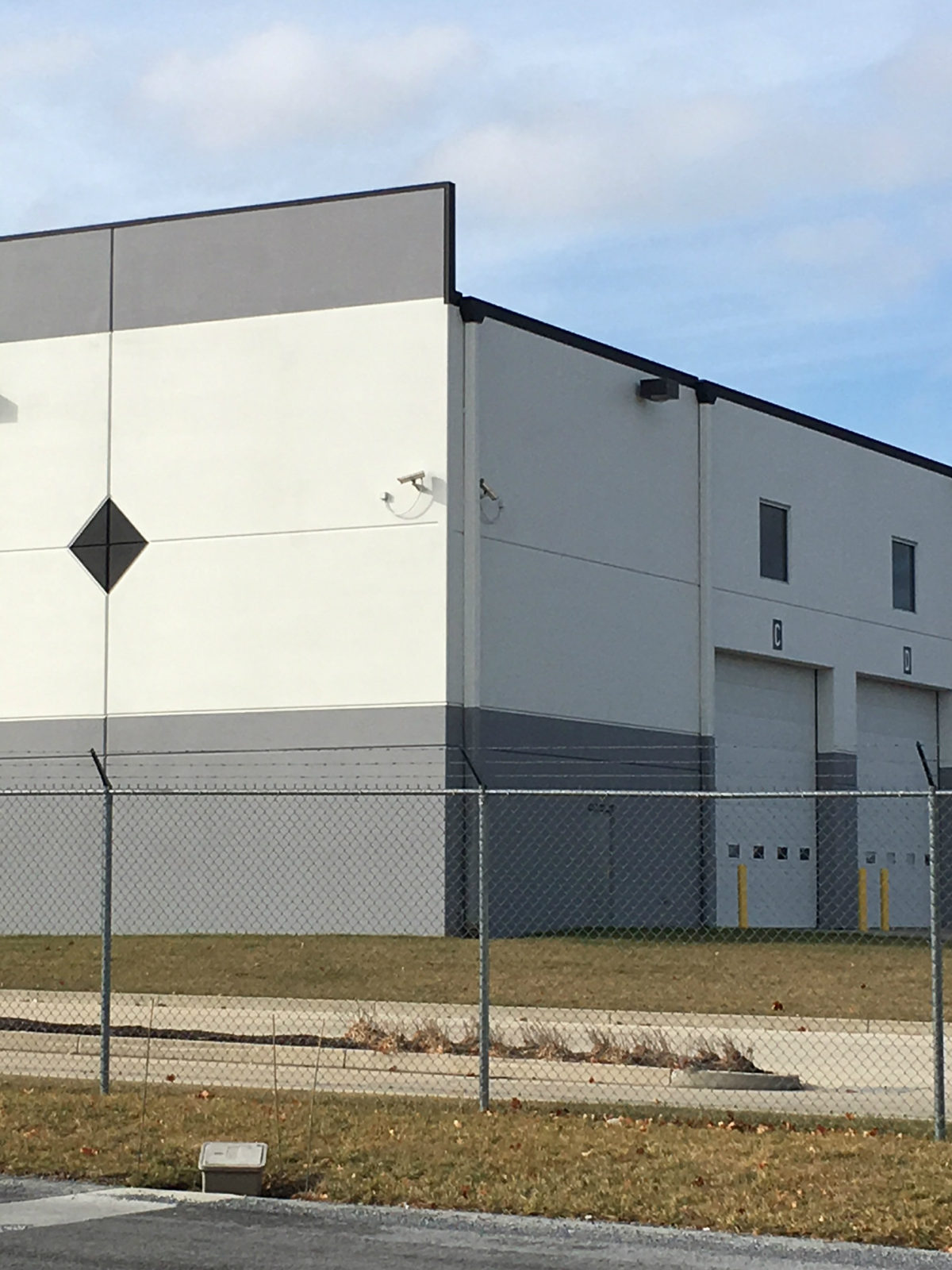 To the right of me is the Sealy Matress parking lot. 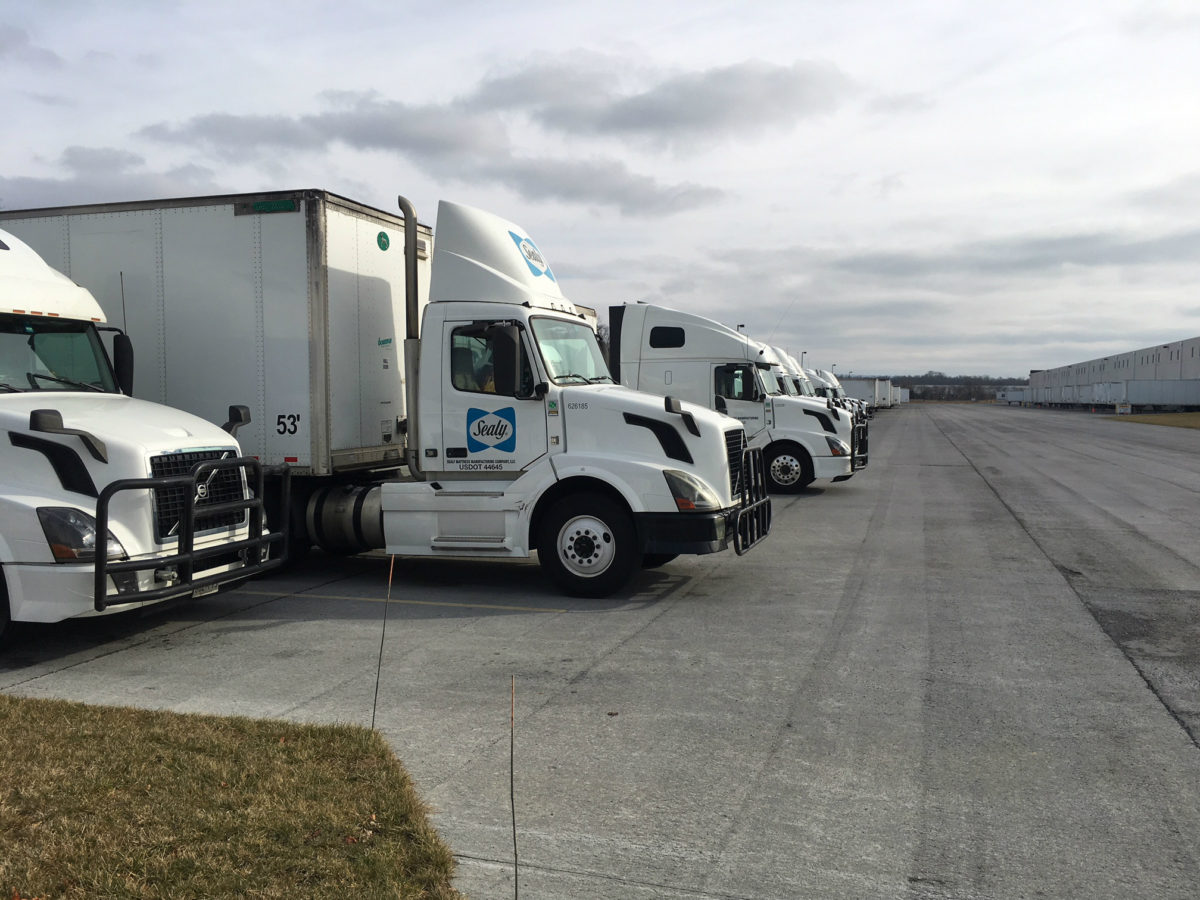 And to the left of me is the infamous parking lot full of United Nations vehicles. 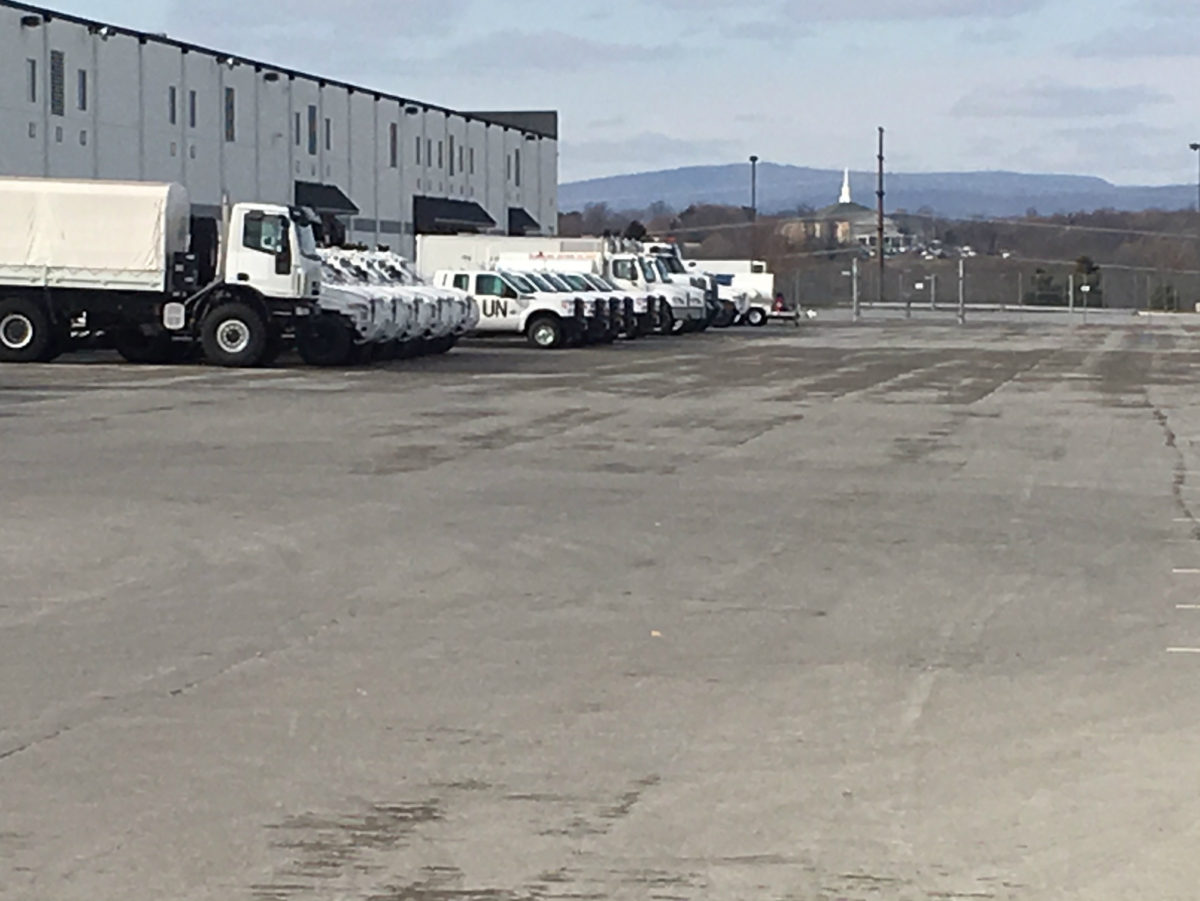 Here are some more pictures from a better vantage point, taken directly behind the building in a marshy area. 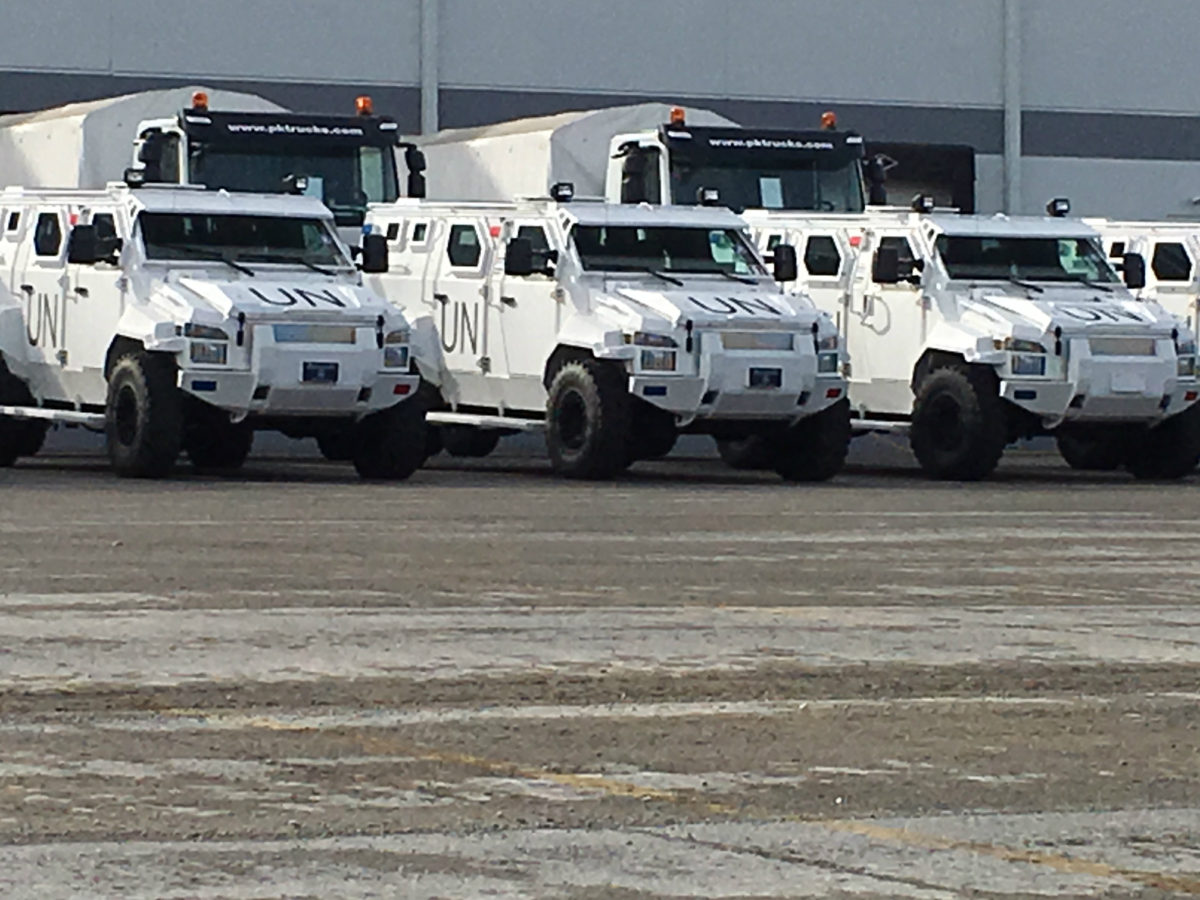 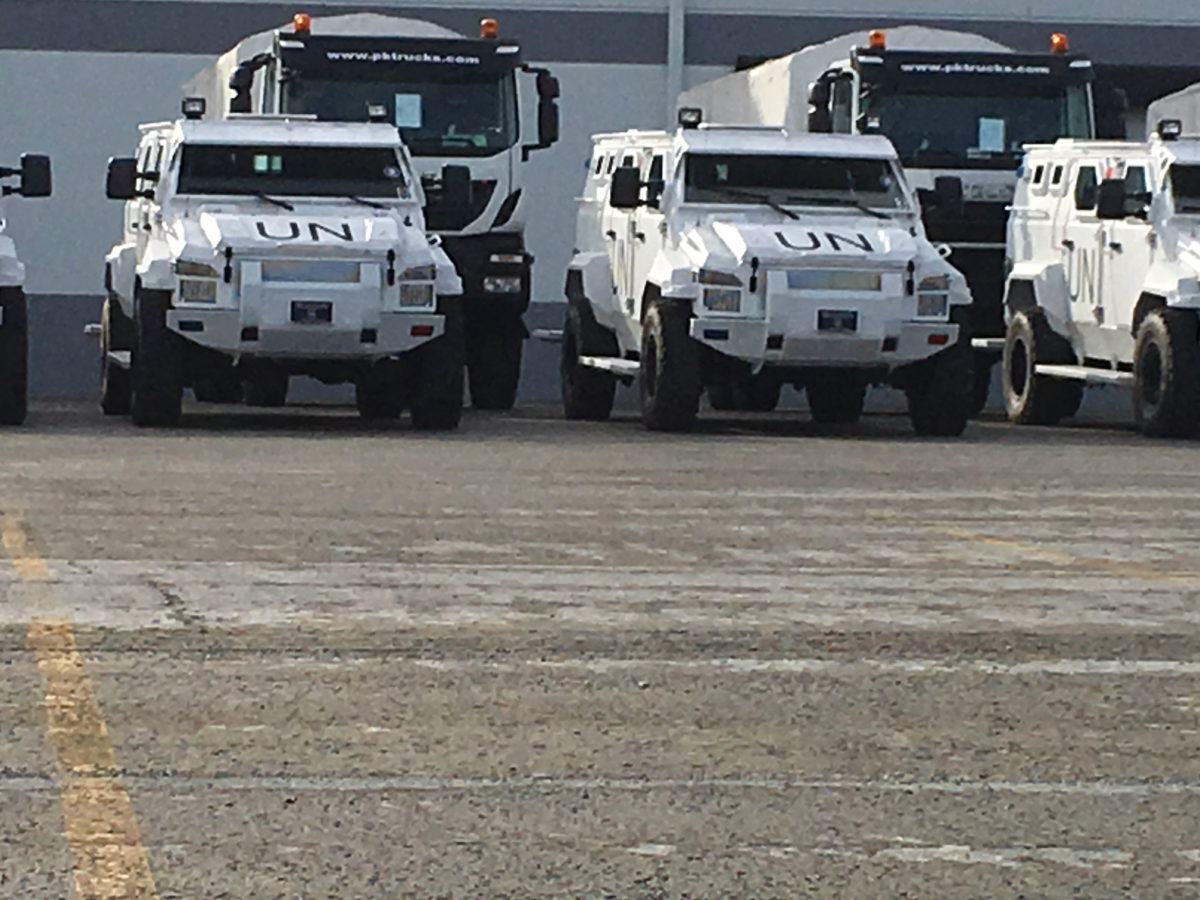 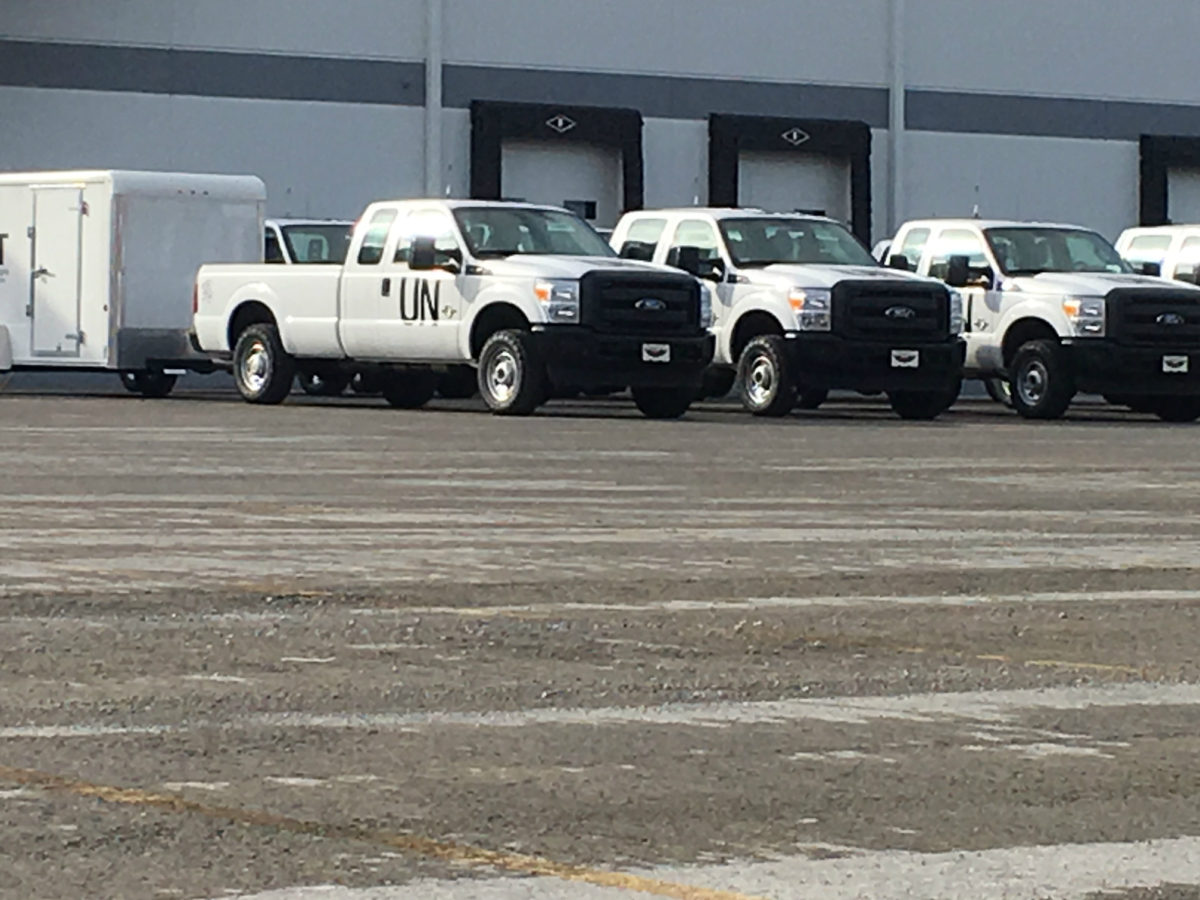 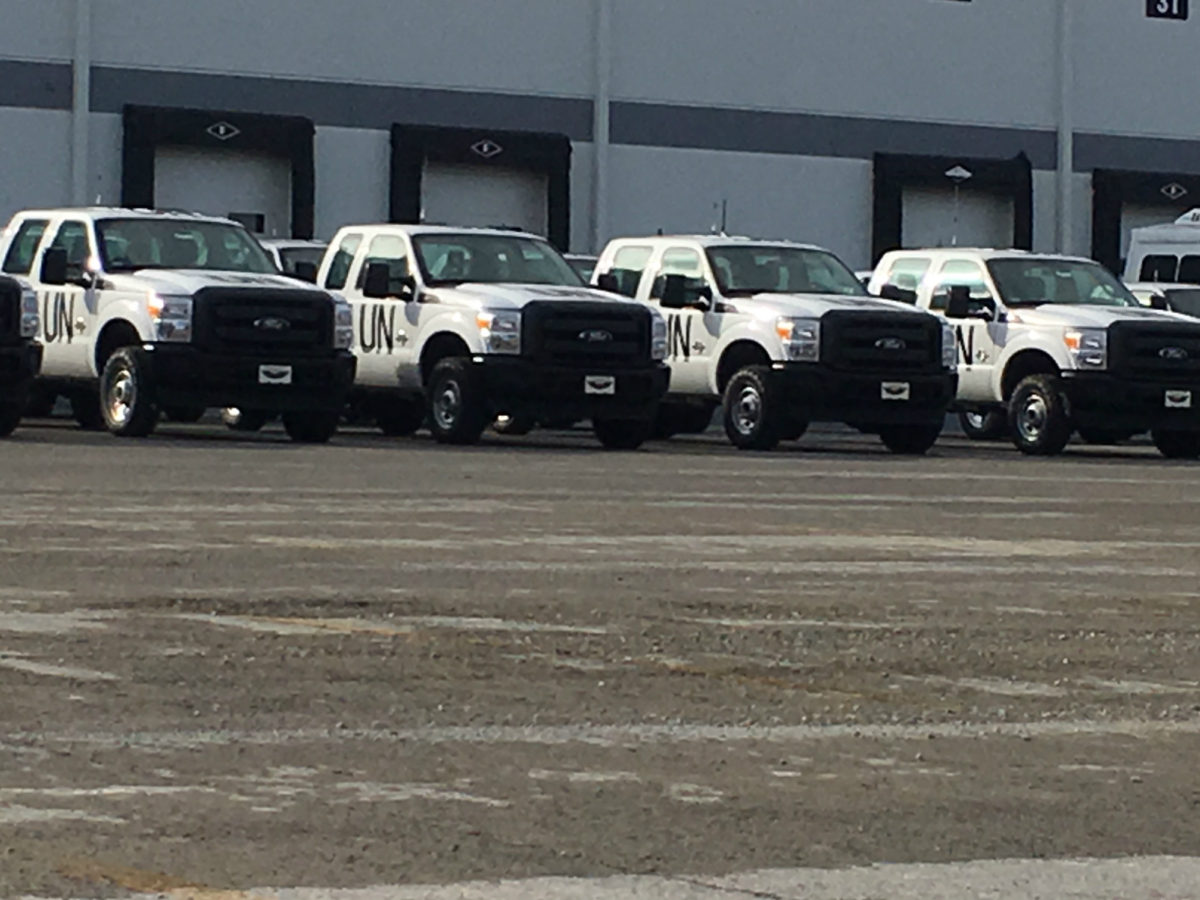 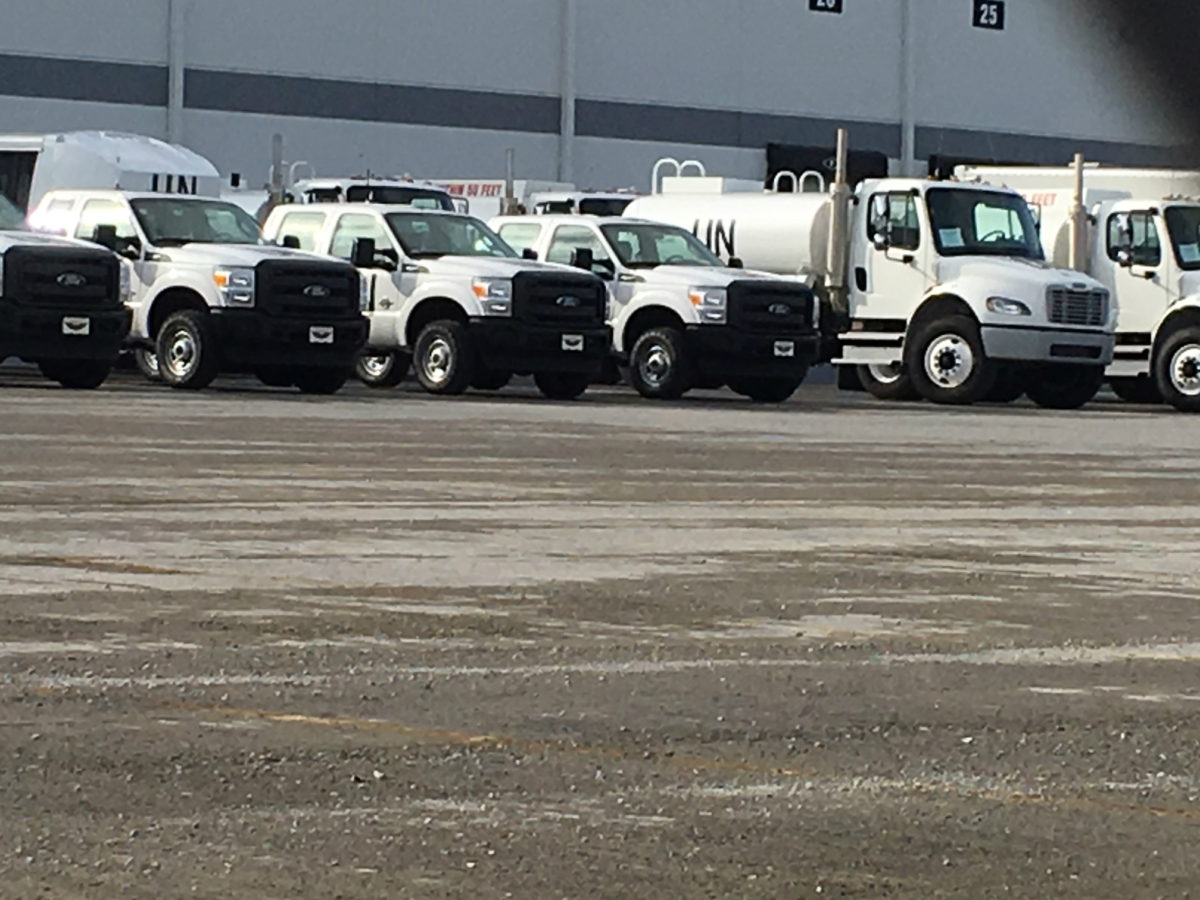 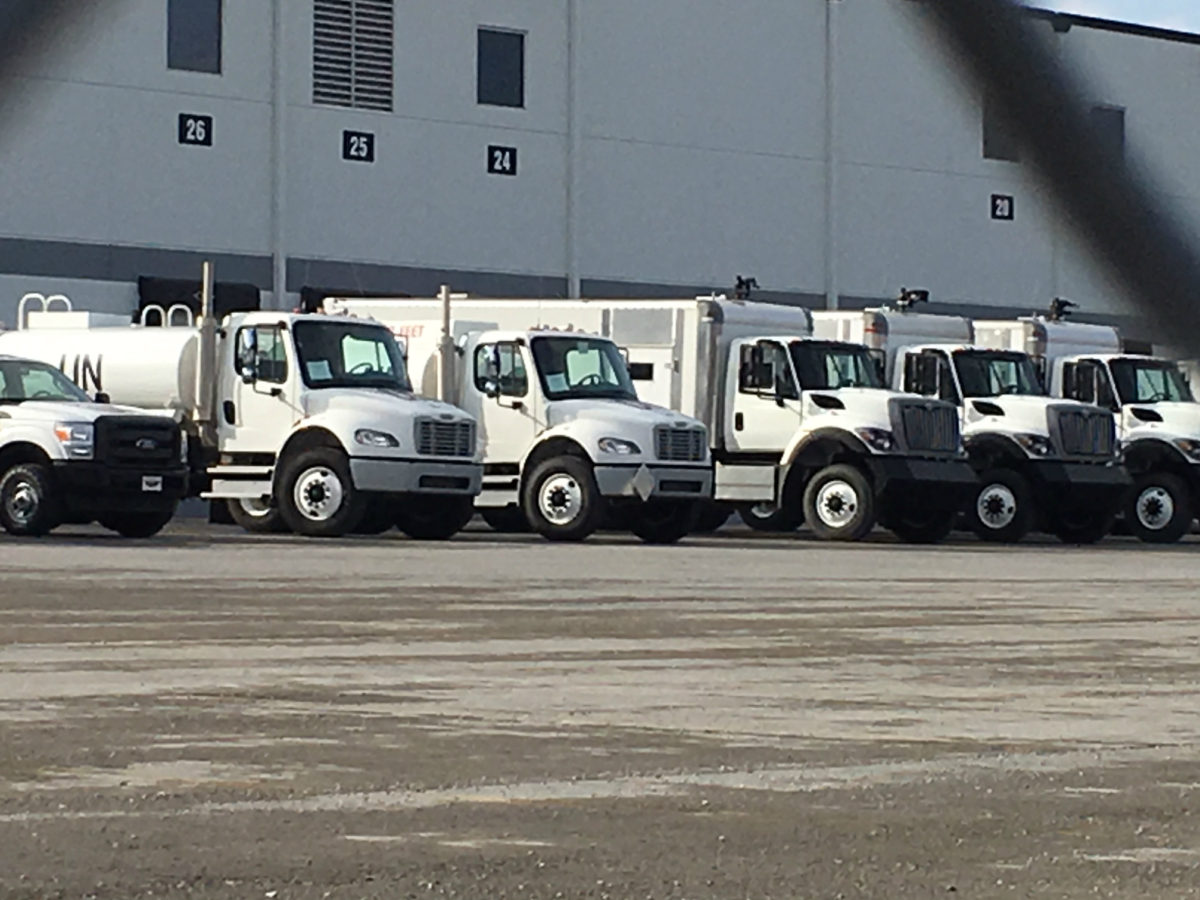 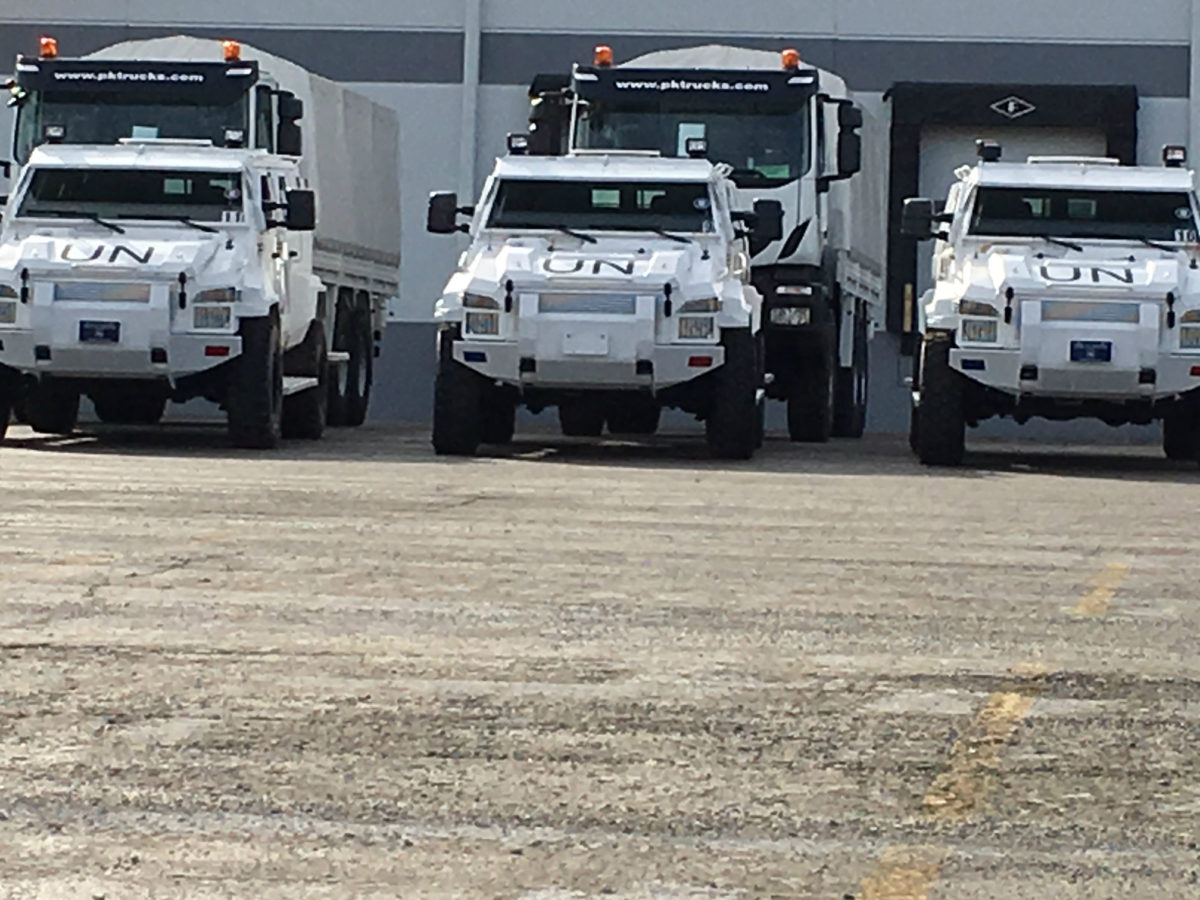 As most know, the housing of these United Nations vehicles is nothing new. Back in 2016 the good people over at Allnewspipeline.com first reported this sighting. 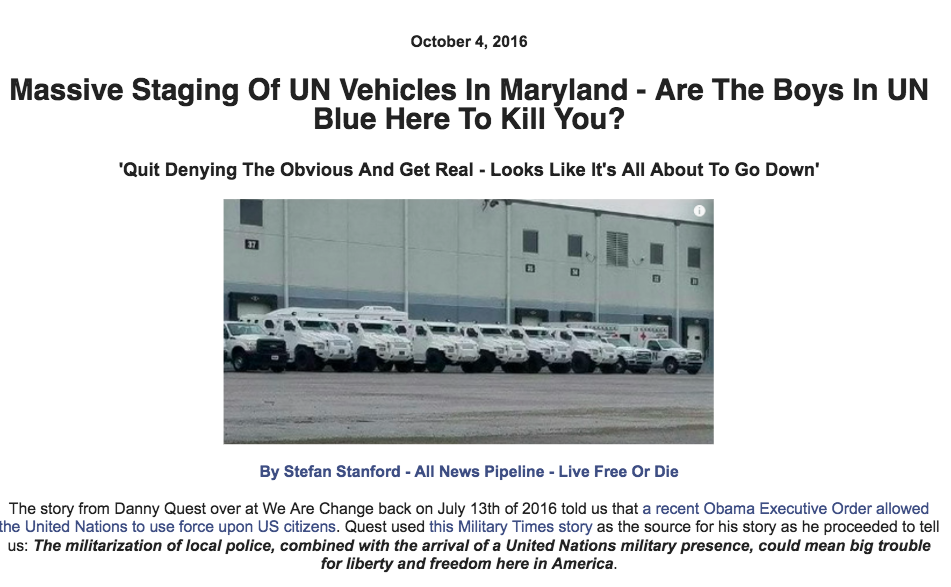 Dave Hodges who’s been warning about the U.N. for years also touched on this in September 2017.

Alastair Williamson, proprietor of Stockboardasset.com, even flew a drone over the area and got some amazing footage.

On December 30, 2017 a local town paper based in Martinsburg, West Virginia (approximately 30 minutes away) ran the headline “United Nations vehicles spotted in Williamsport.” The Journal went on to report: 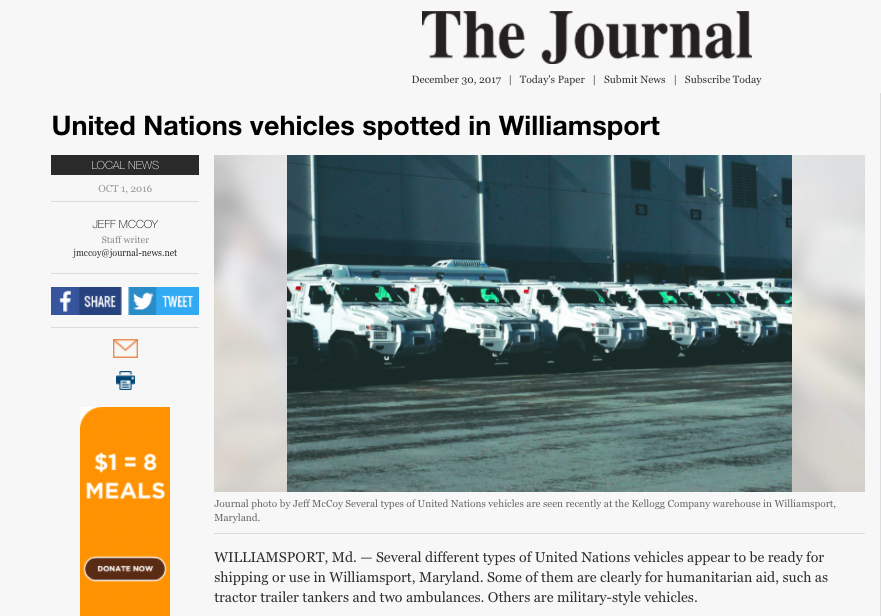 Several different types of United Nations vehicles appear to be ready for shipping or use in Williamsport, Maryland. Some of them are clearly for humanitarian aid, such as tractor trailer tankers and two ambulances. Others are military-style vehicles.

Several residents saw the rows of trucks located near the Kellogg Company warehouse and took to social media. Before long, other people made their way to the location and also shared photos and video.

A man on the scene, who declined to provide his name, said the location is a logistics warehouse for the State Department. He said there is nothing classified or restricted going on at the site. However, he said, the site was being posted “no trespassing” in the attempt to stop more “misinformation” from being spread on social media.

An armed, uniformed Homeland Security officer has been brought in to help establish security and stop people from entering the property. On Friday, “no trespassing” signs were being placed on the fence all around the perimeter.

The unidentified man stated that the gate would be closed. He also claimed that the Kellogg Company had nothing to do with that side of the property. He mentioned that they were getting many calls and a social media post stated that Kellogg was involved with the government.

He claimed that he and the vehicles were a division of the State Department called International Narcotics and Law Enforcement.

The man would not confirm or deny that the vehicles were bound for overseas duty.

So here is what we do know….

We know that the Kellogg’s closed their distribution center sometime in 2017. We also know the U.S. Department of State officially lists this location in their building directory as SA-25. 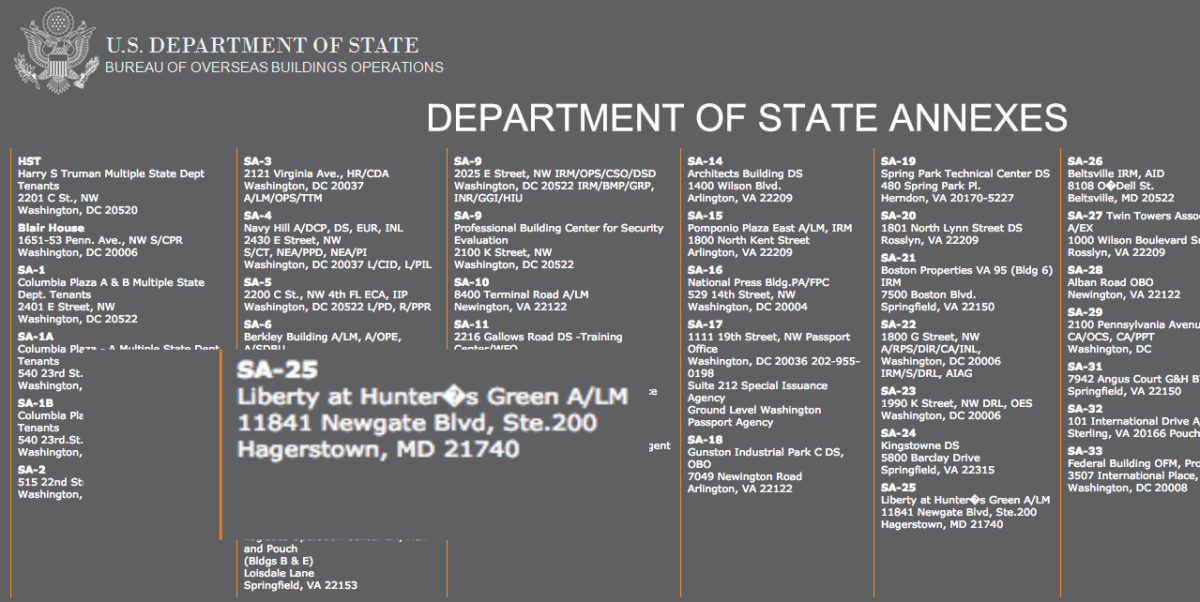 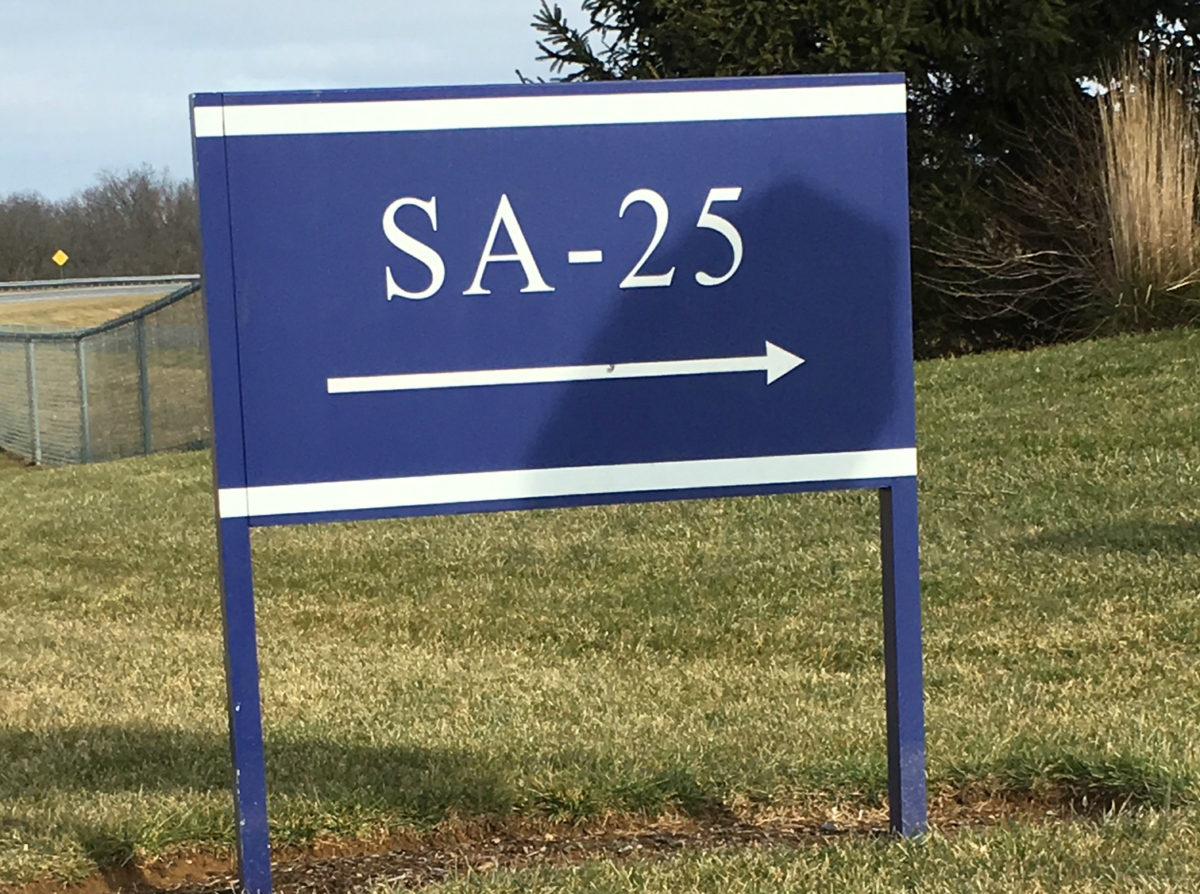 According to business records the U.S. General Services Administration/Department of State (GSA) signed a 10-year lease agreement sometime in early 2009. Below is the press release from their office, note how this space has direct runway access.

Hagerstown, MD – February 11, 2009 The U.S. General Services Administration/Department of State (GSA) has signed a 10-year lease agreement for their new location in the Liberty Building at Hunters Green II Business Park located at 11841 Newgate Boulevard in Hagerstown, Maryland. GSA is currently leasing 370,000 sf in Topflight Airpark at Hagerstown Regional Airport (HGR) and has chosen to relocate their operations due to expiring lease terms.

The Liberty Building contains a total of 554,000 sf of Class A distribution space of which the Kellogg Company currently occupies approximately 215,500 sf. In order to accommodate GSA’s total space requirements of 400,140 sf, an expansion of 61,650 sf will be necessary. Construction for the expansion will begin in March and should be completed by October when GSA plans to fully occupy their new location.

Timothy R. Troxell, CEcD, executive director of the Hagerstown-Washington County Economic Development Commission, comments, “We are excited GSA is relocating within Washington County and will be in the growing, state-of-the-art Hunters Green II Business Park. Their soon to be former location at HGR offers a development opportunity for an aerospace or defense company as the site includes a secured perimeter and direct runway access.”

We can also confirm this location is most likely a storage facility that is housing the vehicles for future deployment by comparing the pictures from the Allnewspipeline article in 2016 and the ones I took on Christmas Eve. But the real question is deployment to where? 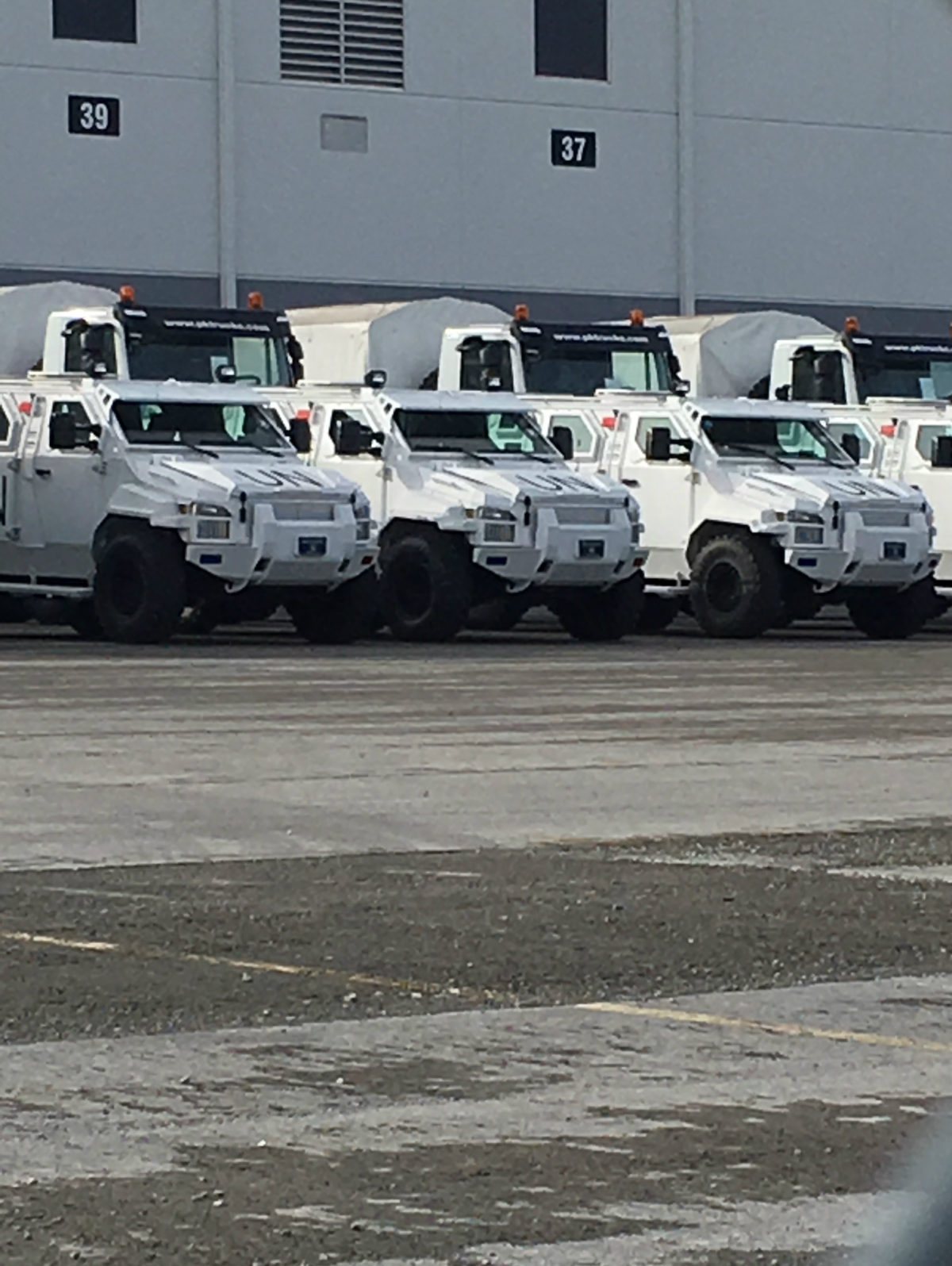 A simple Google search of SA-25 Hagerstown Maryland brings up an interesting State Department PDF that gives some insight into the building and the procedures that go on there, but obviously no mentions of U.N. trucks. 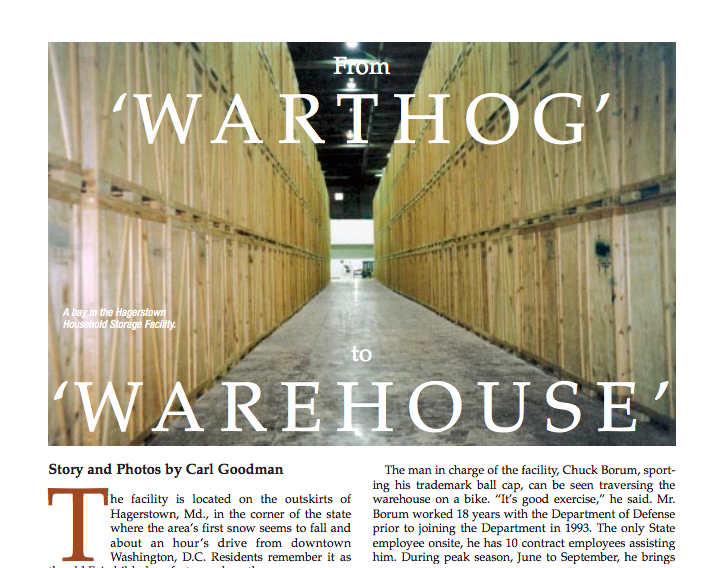 The United Nations is a cancer and its spreading to U.S. soil.

Is it a coincidence that United Nations vehicles are being staged 1.5 hours away from Baltimore, one of the most violent cities in America? Probably not. I think the Federal Government got a rude awakening after watching the Baltimore riots unfold and realized how ill equipped major cities were to handle civil uprisings. Less than one year after the Baltimore riots the U.S. agreed to allow U.N. peacekeeping troops and police to use force to protect civilians in armed conflicts according to this Military Times report:

The United States has announced its support for a set of principles that give a green light for U.N. peacekeeping troops and police to use force to protect civilians in armed conflicts.

U.N. peacekeepers from these 29 countries are now required to act in cases where civilians are in danger.

“The Kigali Principles are designed to make sure that civilians are not abandoned by the international community again,” she said, recalling how U.N. peacekeepers left Rwanda before the 1994 genocide and Srebrenica before the 1995 massacre.

Even more alarming is the fact that Cook County Commissioner Richard Boykin is practically begging the United Nations to come in and help with peace keeping efforts in another violent city, Chicago. Boykin hailed the United Nations as a ‘peacekeeping force’ and warned of the the quiet genocide of gun violence taking place in Chicago.

By design, Boykins is falling right into the hands of the United Nations with his obvious chirps of anti-gun rhetoric by playing the genocide card. As most know the United Nations is one of the most anti-gun organizations in the world and its been widely proven that they’ve had an agenda to rid us of our guns for years. Check out this scathing article written by  Joe Wolverton, II, J.D. of thenewamerican.com that outlines exactly how far the United Nations is willing to go to disarm every gun owner in the world.

Dave Hodges of the Thecommonsenseshow.com has also written tirelessly about the sinister plans of the United Nations for years. Hodges even warned about U.N troops in Chicago almost a full month before Boykins pathetic press conference begging for U.N. troops.

There is no doubt that we are witnessing some sort of future U.N. takeover based on the many sightings of these vehicles, and even troops in US cities.  It is of course an act of treason for U.N. troops to be here policing Americans, but the bigger question is what false flag event will set the stage and allow this to happen without as much as a second thought? The violence in inner cities is most likely just the mustard seed of fear that has been planted, but an even bigger catastrophe is certainly in the works to swing the pendulum of public opinion to not only turn a blind eye, but to actually welcome the presence of the U.N.