MATT AGORIST–Snopes is in trouble. According to a self-launched fund raiser, the ostensible fact-checking website, founded in 1994, is on the financial ropes and needs your support to stay open. A GoFundMe for the supposed hoax-debunking site has since been setup and is going viral. If it continues raising money at this current rate, it will easily surpass its goal of $500,000 by the end of the day.

While Twitter followers flock en masse to throw money at David Mikkelson, one of the controlling partners in the Snopes business, they’d do well to understand why it is he has no money.

Snopes, as a business — is not broke. David Mikkelson — who’s been accused of defrauding the website to pay for prostitution — is broke.

Snopes’ estimated value is in the tens of millions, with a daily revenue intake around five figures — a day. They are currently ranked in the top 2,600 websites globally as well as being in the top 700 domestically. The behemoth ‘fact-checker’ is nowhere near being broke.

However, thanks to a dirty divorce between David Mikkelson and his ex-wife Barbara Mikkelson, the company has turned into a glorious shit show.

If you read their GoFundMe page, David alleges the site is being “held hostage” by a “vendor” it contracted with in 2015 and ended its ties with this spring. He claims that the Snopes site and this “vendor” are engaged in a legal battle that could eliminate their “financial means to continue operating the site and paying our staff (not to mention covering our legal fees) in the meanwhile.”

However, as the Nieman Lab at Harvard University reports, that legal battle seems to be an argument between Snopes co-founder David Mikkelson and his ex-wife, Barbara Mikkelson, over control of the company.

The “vendor” mentioned in the GoFundMe is Proper Media, Barbara’s side of the Snopes business venture she began after the divorce in 2015.

Essentially, David Mikkelson is begging for money to fight his ex-wife for control over their fact-checking empire. He even notes this on the GoFundMe page, “(not to mention covering our legal fees).”

As Nieman Lab notes, Snopes parent company Bardav, Inc. and the vendor, Proper Media, filed complaints against each other over issues stemming from that contract termination. Snopes alleges that Proper Media continues to control the advertising on Snopes.com, and is withholding revenue from those ads from the Snopes team. Proper Media, meanwhile, alleges that David Mikkelson “has engaged in a lengthy scheme of concealment and subterfuge to gain control of the company and to drain its profits.”

“Mikkelson was unhappy that Barbara maintained ownership of half of what he always considered to be his company after the divorce,” Proper Media’s original complaint reads. “Thus, after Proper Media’s purchase of Barbara’s share, Mikkelson sought to finally gain control of Bardav by aligning and conspiring with (Vincent) Green.”

Yes, this mudslinging conspiracy talk is actually coming from the people who claim to be the arbiters of online truth.

So, as their supports continue to throw money at the GoFundMe campaign — at the current rate of $30,000 per hour — the reality is, that their efforts are most likely in vain.

READ MORE:  Snopes, the Supposed Arbiter of ‘Fake News’ — Accused of ‘Defrauding Own Site to Pay for Prostitutes’

As media analyst, Thomas Baekdal pointed out Monday in a series of Tweets, people should — like Snopes tells them to do — remain skeptical. 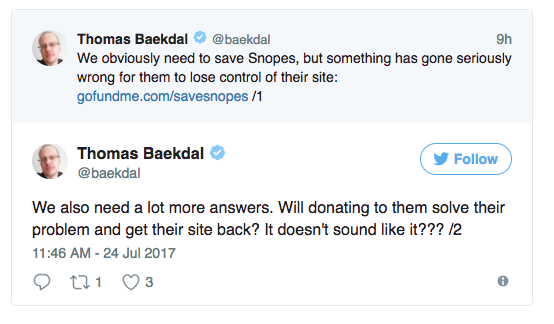 “Proper Media suggests that the media conduct its own fact-check of the fundraising plea posted today on Snopes.com,” Karl Kronenberger, counsel for Proper Media, wrote in an email response. “In summary, today’s post only confirms Proper Media’s allegations that Mr. Mikkelson has drained the company’s bank accounts and is unable to operate Snopes profitably without Proper Media’s expertise and management.”

What these new revelations show us is that Snopes — a website that gained notoriety for debunking online myths — is a cluster fuck.

Fraud, embezzlement, and using company funds to pay for prostitution are just a sampling of the accusations against the CEO of the fact-checking website.

READ MORE:  Snopes, the Supposed Arbiter of ‘Fake News’ — Accused of ‘Defrauding Own Site to Pay for Prostitutes’

“They are accusing each other of financial impropriety, with Barbara claiming her ex-husband is guilty of ‘embezzlement’ and suggesting he is attempting a ‘boondoggle’ to change tax arrangements, while David claims she took millions from their joint accounts and bought property in Las Vegas.”

In a court document from last June, Barbara contended, “He’s been depleting the corporate account by spending monies from it on his personal expenses,” such as purchasing his ‘girlfriend’s’ ticket to Buenos Aires and $10,000 for a “personal vacation” to India.

As Claire Bernish so eloquently pointed out last year, one point incontestably underpinning the personal battle behind the scenes at the company demands an urgent question — with money as the seemingly only motivator, can the public ever be assured Snopes’ checked facts are accurate at all?

Perhaps Snopes has finally been Snoped.