Highway Bluetooth Detectors Are Spying On Motorists And Pedestrians 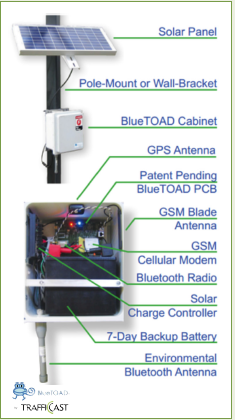 (MassPrivateI)  DHS and the Dept., of Transportation are using ‘Bluetooth detectors‘ to spy on motorists and pedestrians.

Beginning in late 2007 the University of Maryland, with support from the Maryland SHA, developed an anonymous probe technique to monitor the travel time on highways and arterials based on signals available from the point‐to‐point networking protocol commonly referred to as Bluetooth.

If you guessed DHS, is involved in Bluetooth spying, give your self a gold star. Click here, here & here to find out more.

According to Gainesville.com. motorists probably have no idea the government is secretly reading information on their cell phones, tablets, headphones.

The Florida Department of Transportation and city of Gainesville are two of many government entities nationwide now using roadside transponders to read the identification number of any activated Bluetooth device as it passes.

Government agencies like DHS and the DEA use Bluetooth detectors to gather Bluetooth data from a Wireless Sensor Network. For more information about DEA spying, read ‘The DEA has created a massive national license plate reader spying program‘.

Bluetooth detectors will soon be able to identify everyone

By combining a license plate or a phone number with a Bluetooth serial number, it’s possible to track citizens via their phone. Mr. Robertson said.

The DOT admits Bluetooth detectors can be used to identify anyone…

If an electronic device were seized by police as evidence, the MAC address could be determined and matched against Bluetooth detection records.

Similarly, users who download and use certain mobile device applications may make personal information, including their MAC addresses, known to the apps’ publishers, who could then potentially mine, share or sell this information.

Jeff Hayes, Alachua County’s transportation planning manager, said the system is smart enough that if two people with Bluetooth devices are traveling in the same car, they will be recorded together at the first transponder. But if both devices cross the path of a transponder down the road again in the same car, the system figures out they belong to passengers traveling together, and will cancel out one of the ID numbers.

Bluetooth detectors can detect a vehicles speed and location

They can detect a vehicles location, speed and altitude (according to page 25 of the Meshlium datasheet) Bluetooth detectors also use a GPS-3G/GPRS realtime tracker.

According to a Delaware DOT Bluetooth brochure, most phones stay discoverable and vehicles with hands-free systems tend to always be discoverable!

Bluetooth detectors are secretly spying on motorists in National Parks

To mitigate the deterioration of mobility and safety an innovative traffic data detection system is needed to provide drivers with real-time travel speeds and travel time information. The system must be visually unobtrusive (hidden) with minimal impact on viewsheds and disturbance of historical and cultural landscapes. IAI and its collaborator, Sabra, Wang and Associates will develop an innovative, low profile, low cost, low power, and light weight microwave radar with WiFi/Bluetooth sensors for vehicle detection and travel time monitoring.

In other words, the gov’t., is secretly spying on every vehicle visting our National Parks.

According to the DOT, arrays of magnetometers are installed in pavement at detection locations which can identify and match vehicles based on each vehicle’s unique magnetic signature. In-Pavement magnetic detectors, have close to 100 percent detection rate. 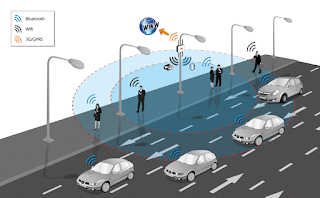 According to Meshilium, the idea is to be able to measure (spy on) the amount of people and cars which are present in a certain point at a specific time, allowing the study of the evolution of the traffic congestion of pedestrians and vehicles.

Users have to do nothing to be detected as the WiFi and Bluetooth radios integrated in their Smartphones periodically send a “hello!” message telling about their presence.

The information read from each user contains:

How to identify Bluetooth Sensors