(ROANOKE)  The suspect in a shooting that left a TV reporter and cameraman dead while they were doing a live news report in Franklin County, Virginia

, Wednesday morning has killed himself on I-66, police tell WDBJ-7 in Roanoke.

The suspect has been identified as Vester Flanagan, who was also known by the name Bryce Williams when he was a reporter at that station.

A first-person video of the shooting was posted on a Twitter account labeled @bryce_williams7 that has since been suspended.

The incident took place at Bridgewater Plaza in Franklin County. Parker was interviewing Vicki Gardner, head of the Smith Mountain Lake Regional Chamber of Commerce, when gunshots begin to ring out. Parker and Gardner are seen running away while the camera, held by Ward, appears to be dropped.

The Bureau of Alcohol, Tobacco, Firearms and Explosives was involved in the manhunt, along with local

“We heard screaming and then we heard nothing,” Jeff Marks, the station’s general manager, said during the WDBJ broadcast.

A still image of the suspect was taken from video that was recorded by a WDBJ camera:

Parker was in a relationship with station anchor Chris Hurst, while Ward was engaged to one of the station’s producers. This is a developing story 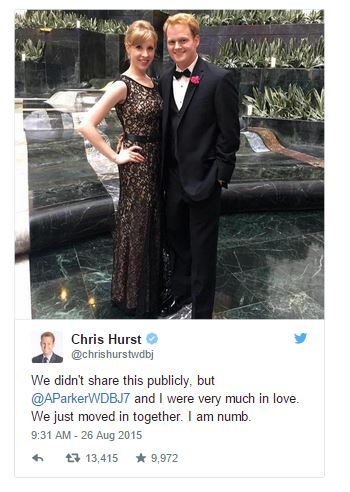