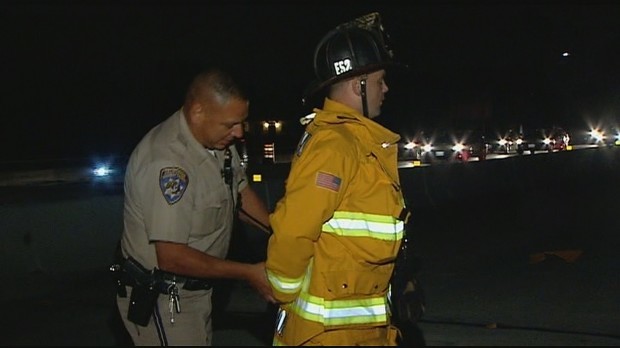 (James Achisal) Responding to a car accident in Chula Vista, California, a firefighter found himself in handcuffs. He was trying to help the victims of a roll-over accident, when a local cop got into an argument with him over his choice of parking spaces.

The California Highway Patrol officer insisted that the firefighter move the fire engine immediately off the center divide.

The firefighter said he would not move it until the crash victims were attended to. What happened next? The firefighter was arrested and the injured passengers were neglected.

“To detain one of our firefighters in the middle of an incident is ridiculous,” the Chula Vista Fire Department Chief Dave Hanneman said about the incident. “It doesn’t provide the good customer service, the good public service that both of our agencies are there to do.”

The representatives from the California Highway Patrol and Chula Vista Fire Department are meeting sometime today to talk about the arrest.

Remarkably, this confrontation was captured on video. Watch the video below…