Evidence Of The Alarming Militarization Of Local Police Forces In America 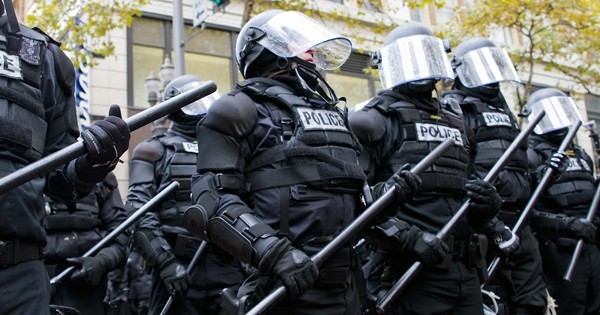 (Jason Howerton) A dramatic raid by local police in Ankeny, Iowa, was captured on surveillance video last Thursday — and it has critics warning of the continuing militarization of police departments in America.

Police were executing a search warrant at the home of a Des Moines family, where they thought they’d find $1,000 in merchandise purchased with a stolen credit card. Given the nature of the crime, some people, including the family, are asking if the excessive force was necessary.

During a tearful interview, Sally Prince told WHO-TV that she has been “traumatized” to the point that she can’t sleep at night. She says if they had only knocked first, she would have consented to a search of her home.

Police claim they first knocked on the door, but the surveillance video shows an officer pounding on the side of the house seconds before officers used a battering ram to bust through the front door. Police are also seen destroying a security camera outside the home and covering another with some sort of fabric.

A search of the home did not result in the recovery of the items police believe were bought with stolen credit cards. “Two people in the house were arrested on unrelated charges, and the family says none of the items listed on the warrant were found,” the report adds.

Though there were no injuries reported in the incident, things could have easily turned deadly.

Prince’s son, Justin Ross, has a permit to carry a firearm on his person. When he heard commotion, he says he drew his weapon while in the bathroom and prepared for an intruder to come through the door.

Luckily, he heard one of the cops in the other room say “police” before they kicked in the door, so he re-holstered his weapon, sat back down and placed his hands in his lap away from his gun. If he failed to hear police identify themselves, he could encountered officers with his weapon drawn and could have possibly been shot and killed.

“This is over property purchased with a stolen credit card,” Prince said. “It doesn’t make any sense to go to such extremes for something that simple.”

When pressed on the decision to send in a unit similar to a SWAT team, Ankeny police spokeswoman Captain Makai Echer said it came down to the suspects’ criminal histories and other factors.

“Of the three suspects that were present in the home, one has a violent arrest record for two assaults about 13-years ago and a domestic assault,” WHO-TV reports.

It wasn’t clear if the fact that Ross has a legal permit to carry a firearm factored into their decision to conduct the military-style raid.

The surveillance video has been making its way across the Internet and has some critics warning of the “dangers of police militarization.”

“When critics (like me) warn about the dangers of police militarization, this is what we’re talking about. You’ll see the raid team, dressed in battle-dress uniforms, helmets and face-covering balaclava hoods take down the family’s door with a battering ram,” the Washington Post’s Radley Balko writes.