Missing for 8 Days, Ukraine Activist Turns Up Alive, but Mutilated 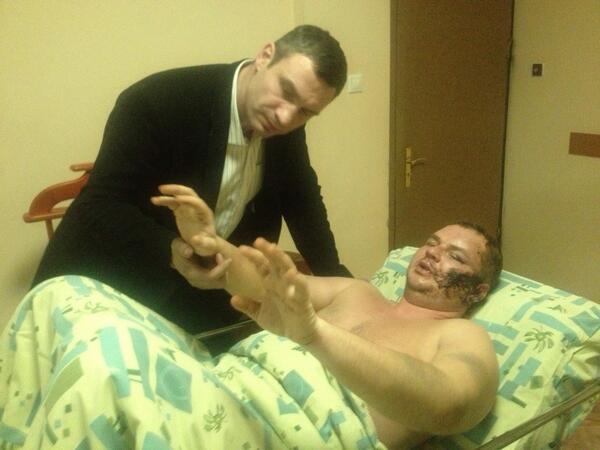 (Christopher Miller) To put it mildly, Dmytro Bulatov had one hell of a week.

Bulatov, a Ukrainian activist and leader of roving protest group AutoMaidan, disappeared without a trace more than a week ago amid the most violent protests that have racked Kiev.

The good news was that he was found alive Thursday evening. However, he was severely battered, bloodied and missing part of one ear. He said that his captors had left him for dead in the freezing cold.

Speaking to Ukraine’s Channel 5, in the same blood-soaked clothes he was found wearing after he turned up in the village of Vyshinsky outside Kiev, he explained in excruciating detail that his captors kept him in a dark shelter for eight days and brutally beat and tortured him, mutilating his ear and driving nails through his hands.

“They crucified me,” he said, pointing to marks on the backs of his hands where the nails were driven through. “They cut off my ear, slashed my face. There’s not a single alive spot on my body. But I am alive, thank God.”

Online Ukrainian news website Gazeta.ua reported that doctors found no damage to his internal organs or his skull.

Bulatov, 35, disappeared on Jan. 22; his wife reported him missing on Jan. 23 after calls to his mobile phone went unanswered and his car was found abandoned.

He is currently being treated in a private medical clinic in Kiev, where he was visited by opposition leaders Vitali Klitschko and Petro Poroshenko. Klitschko, the former heavyweight boxing champ-turned opposition leader of the UDAR (Punch) party, said the torture and abuse that Bulatov was subjected to was done to intimidate those critical of authorities here and to demonstrate that it could happen to anyone.

“What was done with Dmytro is an act of intimidation of all active citizens, because AutoMaidan is an effective movement, which is fighting against the authorities, and many of its activists have already suffered,” Klitschko said. “Some were beaten, some had their cars smashed, and some were jailed. Dmytro, one of the AutoMaidan leaders and a man who is not afraid of expressing his civic position, was kidnapped and tortured for a week.”

A distraught Poroshenko, the Ukrainian businessman and opposition politician, told Channel 5 news that Bulatov is energetic and his “spirit is strong” despite being badly beaten.

“Dmytro asked to pass his greetings to everyone and to say that he has not been broken and will not be broken,” he said.

Western diplomats, including Carl Bildt, the Swedish foreign minister, reacted to the news or Twitter.

At the same time, Kyiv police opened criminal proceedings into the abduction on Friday, with the Interior Ministry overseeing the investigation, the ministry’s press service reported.

Activists and colleagues of Bulatov took it upon themselves on Friday to investigate the kidnapping. They dug up a post on the website of a mysterious group called Oplot, which has been linked to Gennady Kernes, a supporter of President Viktor Yanukovych and staunch critic of the anti-government protests here, which boasted about cutting off the ear of an activist. Online news website Censor.net.ua posted a screenshot.

Bulatov is known for leading AutoMaidan, the group of more than 1,000 anti-government protesters who used their vehicles to blockade access to the homes of Ukraine’s political elite. More than 2,000 drove to the lavish estate of embattled President Yanukovych on Dec. 29, coming within 300 meters of his front gate before they were stopped by riot police.

A number of its members have received threats in recent weeks as a result of their actions. On Jan. 23, the day after Bulatov disappeared, 15 AutoMaidan activists were jumped by police and beaten.

The attack on Bulatov is the latest in a string of incidents apparently meant to intimidate anti-government protesters who have remained camped out in central Kiev to protest a government they describe as a “dictatorship.”

Activists Ihor Lutsenko and Yuriy Verbytsky were kidnapped from a Kiev hospital earlier this month and then tortured and held for 10 hours. Lutsenko managed to get help after he was tossed from a car in an area near where Bulatov was found. But Verbytsky, having suffered more serious injuries, was unable to walk from a wooded area where he was dumped in subzero temperatures. His body was found with a plastic bag over his head and remnants of duct tape around his hands and feet.

Another prominent activist and journalist, Tetyana Chornovol, was chased in her car before being dragged out, beaten and left for dead in a ditch. Chornovol is known for her investigations into the murky lives of Ukraine’s political elite. The day of the attack, she had published a report showing what she believes to be the extravagant new country home of the Minister of Internal Affairs Vitaliy Zakharchenko.

She has since returned to the protests and become a main voice of the anti-government movement now in its third month.

Protests kicked off in November when Yanukovych spurned a long-anticipated political and free trade deal with the European Union in favor of aligning more closely with Russia, which offered a $15 billion bailout package to the former Soviet country as a reward.

Over the course of the protests, demonstrators have set up camp, equipped with military tents and field kitchens, in central Kiev. They have also seized several government buildings, including city hall. Anti-government protesters in other regions of Ukraine last week took over regional government buildings; at least 10 are still in their positions.

Opposition leaders and protesters have demanded the resignations of President Yanukovych and his government, along with snap presidential and parliamentary elections and unconditional amnesty for those who have taken part in the protests.

Ukraine’s government made some concessions to them this week. Prime Minister Mykola Azarov was dismissed by Yanukovych after tendering his resignation. And the president signed an amnesty bill into law on Friday that grants immunity to “peaceful protesters” who vacate occupied government buildings and their barricaded camp in central Kiev. He did so after taking indefinite sick leave, according to a statement posted to the president’s website.

The news of the sick leave prompted some to speculate that Yanukovych was loosing his grip on power.

Opposition leaders and protesters alike are unsatisfied with the deal and have vowed to remain on the streets until their demands are met. At least one group, the militant far-right Right Sector, which has been at the forefront of violent clashes with police on central Hrushevskoho Street in recent days, said it would go on the offensive unless authorities heeded their demands soon.