Secret FEMA Death Camps: Already At a Location Near You 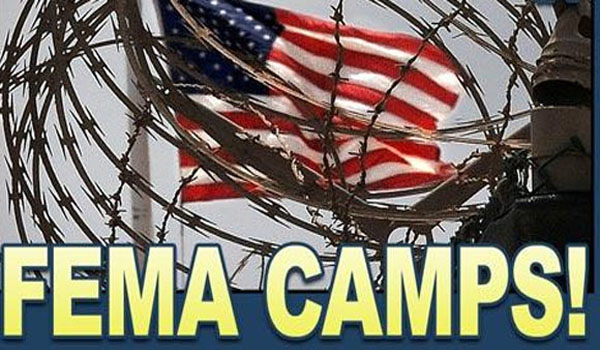 (TellMeNow) As Obama’s administration continues to creep closer and closer to tyranny, one could only imagine how far he’d go before Americans started to revolt. Lucky for Obama, he’s already begun plans to contain the situation, allowing him to progress with his agenda with as little resistance as possible—through the use of FEMA camps.

We all know, Obama is working all hours of the day to try and disarm as much of the population as possible, and although he claims it in the name of American safety, many U.S. citizens know otherwise. But if it were to come to a point where Americans needed to be suppressed in order for the preservation of Obama’s reign to prevail, what would he do?

Obama has recently discussed his new proposal of “prolonged detention,” and that isn’t based off of a crime you have already committed. In fact, Obama explains that he intends to incarcerate, until he sees fit, anyone that poses a threat to America and may potentially commit a crime in the future, including Americans. As Liberal activists fight to have Gitmo shut down, Obama has taken advantage of the time to inform the American public of these indefinite detention centers.

Our Commander-in-Chief explains that these centers will be placed for all Guantanamo Bay prisoners that are too dangerous to let go and still remain a threat to our nation. He goes on to mention that anyone else that is captured in this preemptive nature will also be housed here. In the case of a revolt, how many American’s do you think will be deemed a threat to United States of America and indefinitely detained? Where would Obama store all these people?

Obama has ordered the secret construction of FEMA camps all over the country and he’s told his minions to do it as quietly as possible. These FEMA camp’s may have the appearance of a helpful establishment placed there in preparation for a time of need (i.e. natural disaster), but look a little closer and you may see otherwise.

All FEMA facilities have several layers of fencing, all of which for some “mysterious” reason, have barbed wire at the top, pointing toward the inside of the fence. Why would you want to keep people you are helping in? Along with this, electronically operated turnstiles guard the only entrance(s) into the gated sections. Cameras can also be seen watching closely over the supposedly abandoned sites, and wind socks have been placed anticipating the arrival of helicopters.

Check out an example below:

FEMA camps are popping up in extremely inconspicuous places—an abandoned train yard, extra space on airport property, or even industrial complexes. Want to see where the closest one is located near you?

Check it out here—it may be closer than you think.

On top of all this, the Army is also recruiting for what they are calling an, “Internment/Resettlement Specialist (31E).” Of course they would love to explain that these specialist’s expertise would be used in other regions of the planet, and as you all know, the military isn’t allowed to operate in the United States. If this is the case, then why the sudden need to recruit so many more?

Obama will soon take advantage of the law that Bush passed—but never used—under his administration. Bush passed a law that would allow the current President of the United States to declare martial law at their discretion under executive action—and we all know how much Obama loves to bypass congress. Once this is in place, the military will have the power to act as Obama’s henchmen, and throw any freedom loving patriots into these FEMA Camps.

What do you think—is it time to get worried yet?