Vet Suspended For ‘God Bless You’ 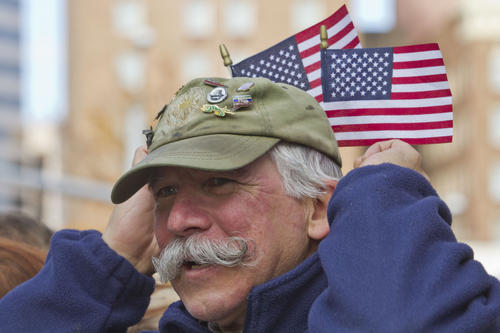 (Bob Unuha) Stockton, Calif., hospital has suspended a 10-year employee because he included God Bless America in the signature line of his emails, even though he obeyed an order to remove the offending phrase.

Boots Hawks, a military veteran, returned to work Nov. 6 at Dameron Hospital to find lock combinations and his computer password had been changed, according to Pacific Justice Institute, or PJI, which is representing him.

“Rarely do we see something as shocking as supervisors placing a hard-working military veteran on leave right before Veterans’ Day for saying something patriotic such as God Bless,” said PJI President Brad Dacus.

“The hospital’s actions were outrageous and illegal. We expect a swift apology and full restoration of Mr. Hawks’ rights,” he said.

The hospital did not respond to a WND request for comment.

A letter from PJI Staff Attorney Matthew McReynolds to the hospital’s chief nursing officer, Janine Hawkins, argued the federal Civil Rights Act of 1964 and the California Fair Employment and Housing act bar workplace discrimination on the basis of religion.

“In light of the widespread dissemination of a plethora of philosophical statements among hospital employees and management, the directive that Mr. Hawks delete God Bless America is indefensible,” McReynolds said.

He explained that the hospital ordered the censorship, and when Hawks complied, he said he wanted to consult with legal counsel.

That apparently, according to the hospital, constituted “insubordination.”

“It is untenable and insulting to claim that his compliance and consultation with legal counsel is insubordinate. On the contrary, it is common sense,” the letter said.

McReynolds noted that Hawks has been a dedicated employee for 10 years, earning such distinctions as ‘Employee of the Year’ for his work in quality assurance.

Prior to joining the hospital staff, Hawks spent 20 years in the U.S. Army, attaining the rank of sergeant first class. PJI is demanding that supervisors rescind their disciplinary action and their censorship.

The legal team asks to be notified no later than Friday that the leave has been rescinded and the directive to censor his email dropped.

“Otherwise, we will proceed with all appropriate legal action to ensure that this veteran does not lose the freedoms or livelihood for which he fought.”