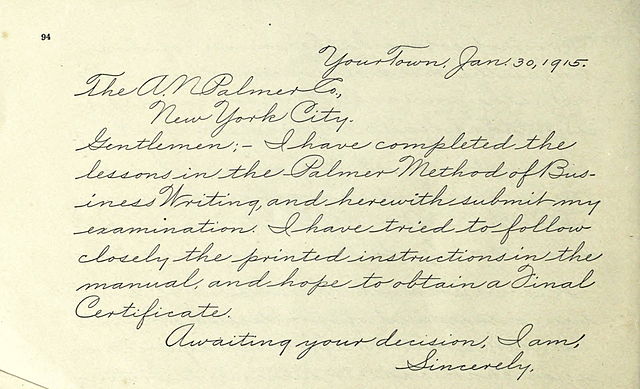 THE REAL REASON THEY WANT TO BAN CURSIVE

(Thomas Dishaw)  Cursive writing was once considered an anchor in the elementary school curriculum,  as flowing strokes of letters joined together to make words resemble handwriting.

Over the years, we have seen an alarming trend as schools systems abandon this writing technique, leaving the burden on the parents to continue teaching this writing style if they choose to.

You may be asking what’s the big deal? Cursive writing is outdated and irrelevant, right? It’s 2013,  and in todays world you don’t need to learn cursive because we spend most of our time on a computer typing emails, sending tweets,  messaging friends on Facebook and using our phones to send text messages. As simple and innocent as these actions may be, it should alarm you to witness the regression our language has made in such a short time.

George Orwell said it best ““It’s a beautiful thing, the destruction of words.”

Everyday vocabulary as we know it is continually being assaulted by LOL, OMG, JK, and a whole bunch of other acronyms  I refuse to learn or become familiar with. It’s truly amazing to see the language jump from your smart phone straight  to the dictionary as gibberish like “SRSLY”, “TL;DR” “FIL” become cousins with real words in the Oxford English Dictionary.

As we have incrementally come to accept the deliberate dumbing down of the language through acronyms, let me address the importance of cursive and why the Government and public school prison system would love for your children to never learn this art form.

Wouldn’t it be great if you or your child could never read historic documents such as  the Declaration of Independence or the The Bill Of Rights? The global controllers are banking on that.  Imagine a future where you don’t even know your basic rights? Not because you don’t care, but because you can’t understand the basic form they are written in.  Most may laugh, but a  scenario like this is very possible. In 25 years cursive will be extinct by my estimation, and only small pockets of the population will know how to read or write in this form of communication.

Here is a list of a few important documents written in cursive: