(BAHL)  Every two years, in keeping with governmental regulation, mandatory continuing education for many professional licensees is required. Last week, in order to keep my Certified Residential Appraiser license in good standing, 40 hours were taken in at the Peabody Hotel in on tourism row in Orlando.

Among the courses presented in the snore fest was The Introduction to Residential Green Buildings.  As you may suspect, the course provided the opportunity for advocacy of the green movement by the instructor, and the moment was seized.

The instructor surmised that homeowners were embracing energy restriction by downsizing the gross living area of homes being purchased.  To the contrary, the lowering of the average GLA is largely due to the economic status of America, which due to governmental interaction in markets has severely hampered job creation and created elevated levels of uncertainty.

Public and private sector organizations, the US Green Building Council and the Shelton Group, advocates for green energy initiatives, were referenced as leaders in assessing all things green, from measuring consumer acceptance to rating and regulating building energy efficiency.

On the course evaluation, I wrote “portions of the class unfortunately bordered on advocating the propaganda surrounding the pursuit of sustainable development, having the feeling of being “nudged” minus Cass Sunstein” closing with “Sustainable development infringes upon property rights”.

It should be noted that all responsible citizens should engage in efforts to refrain from polluting and wasting energy.  In addition, in our free market society there are many opportunities as a property owners to maximize cost efficiency with regard to energy usage, and these are prudent investments. 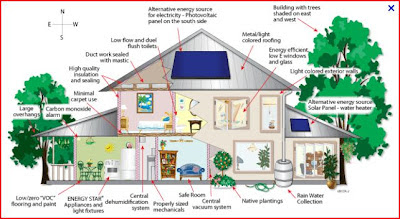 Unfortunately, common sense initiatives have been expanded upon by governmental regulators influenced by left wing environmentalists, global warming alarmists and a very nefarious group who are supporters of Agenda 21, or sustainable development; a global effort to implement social justice.

As reported in Investors Business Daily, Agenda 21 is a frontal assault on formative principles of our founding fathers.  One of those is property rights. “Land … cannot be treated as an ordinary asset, controlled by individuals and subject to the pressures and inefficiencies of the market,” Agenda 21 says.

“Private land ownership is also a principal instrument of accumulation and concentration of wealth and therefore contributes to social injustice; if unchecked, it may become a major obstacle in the planning and implementation of development schemes.”

Property rights are central to our sovereignty, and on these central principles there can be no compromise.

Agenda 21 is intended to foster what environmentalists call “sustainable development” in the belief that man since the Industrial Revolution has been a plague on the planet, plundering its resources while destroying nature and putting the world at risk of disastrous climate change, poverty and disease.

If you were thinking those attempting to implement strategies in this arena were those on the left wing extreme, you would be correct, and they are currently running our government. This group has done a masterful job in promotion of the greatest hoax of all time, global climate change, to the mainstream citizenry and business leaders.

Many, perhaps fearful of being on the wrong side against a government who takes few prisoners, are eagerly on board.  Some are financially tied to government, and have no choice but to gleefully participate.  In fact, just yesterday, TARP recipient Bank of America (BAS:NYSE) pledged 50 million to combat global warming.  Have not seen a sell signal like that in a while.

Unfortunately, governmental regulators, which include the EPA, unelected regulatory Czars and Obama and his executive orders are shoving Agenda 21 down our throats, which increase costs in arenas inclusive of energy, building maintenance and regulatory compliance.  In fact, just this week President Obama said he would make climate change his top priority in his second term, although odds are increasing he won’t get that chance.

Even so, as industries have bought into the climate change premise, policies in this regard are emerging to overwhelm business owners, limiting economic freedom and free market prosperity.

Agenda 21, an arm of the United Nations, is on the verge of gaining binding influence in our court system.  The Law of the Sea Treaty, up for vote soon in Congress, is a current example. As alarming as this is, America appears to be waking up as Alabama voters handed Agenda 21 such a lopsided loss, you would think Crimson Tide.

Our rights are being trampled under foot, and many remain unaware.  Under global climate change, arms of the movement are working like termites to gain control of the structure, pun intended, of our governance.  Time is of the essence, and with the Obama presidency seeming on the ropes, danger lurks behind every two by four.  Inform your friends about Agenda 21, and hit the voting booth in opposition at your earliest opportunity.