(Adrien Lowery)European Union officials have discussed measures to stop mass withdrawals from cash machines, a report claimed today, if a Greek exit were to tip the eurozone into a deeper crisis.

The officials stressed they did not expect Greece to leave the euro and the ideas were from a range of contingency plans – but the preparations indicate the gravity which EU leaders are attaching to a potential Greek exit.

Fragile: Any strong indication that Greece was about to leave the euro would see a run on bank deposits

Greek elections on Sunday could see angry voters back radical left-wing parties opposed to austerity – pushing Athens closer to an exit from the euro.

James Hickman, managing director of Caxton FX, the contingency plan in case Greece drops out of the single currency is ‘hardly surprising’.

THE ‘JOG’ ON SPANISH AND GREEK BANKS

While scenes of a Northern-Rock style run with savers queuing outside branches to pull out cash have not emerged, both Spain and Greece have reported substantial increases in money being pulled out of banks – in what has been called a ‘bank jog’.

European Central Bank figures show Greek deposits down by 17 per cent in the year to the end of March 2012, and in the ten days after the 6 May election, savers were reported to have pulled £3bn out of Greek banks.

Meanwhile, figures published by Spain’s central bank showed €97bn was pulled out of the country in the first three months of the year – around a 10th of the country’s GDP.

The slow motion flight of deposits has come as savers and firms worry about not just banks’ safety but also their countries’ continuing membership of the euro.

Greek depositors fearing a Greek exit from the euro – which would see citizens rushing to get hold of their euro deposits – have been pulling billions of euros out of the nation’s banks.

Both private individuals and businesses have been transferring funds to places they believe are safer – such as German banks or the London property market.

Routes such as transferring assets to subsidiaries or private banks elsewhere are being used to move large amounts of money by international companies and the wealthy.

These methods are not open to ordinary citizens, but Greeks have been reported to be pulling out cash and stashing it away in case the currency falls out of the euro and returns to the drachma.

Many are also transferring any spare cash held in savings abroad to relatives or friends and asking them to hold on to it. One Greek living in London told This is Money that many of his compatriots have been regularly moving any money they can out of the country for some time.

‘The situation in the eurozone is worrying to say the least and any responsible institution should of course be preparing for the worst-case scenario,’ he added.

Stock markets across Europe were steady today after yesterday’s rollercoaster ride in the wake of Spain obtaining £80billion from the EU to shore up its banking system.

But Spanish and Italian 10-year government bond yields were trading at 6.59 and 6.01 per cent respectively, as investors worried how Spain’s debts would be repaid. That is worryingly close to the 7 per cent level widely seen as unsustainable, and which triggered bailouts in Greece, Ireland and Portugal.

‘Despite Spain’s banks being better off to the tune of €100billion, yields on Spanish government debt have surged above the danger level as traders interpret this as an escalation of the debt crisis and not as a preventative measure that policy makers had tried to spin things,’ said Jonathan Sudaria, a dealer at London Capital Group.

Italy, as well as Cyprus, came into the eurozone firing line last night after the Spanish bailout failed to inspire a lasting boost for markets. Early euphoria evaporated as investors fretted about the details of a Spanish rescue and which country would be next to need support.

Kathleen Brooks, an analyst at Forex.com, said: ‘Throughout this crisis Europe’s periphery has been personified as a pack of dominos – if one falls then others will follow. So now the attention turns to the next domino.’

Cyprus, which is heavily exposed to Greece, hinted that it may need a bailout by the end of the month – both for its banks and the country as a whole.

‘The issue is urgent,’ said finance minister Vassos Shiarly. ‘We know the recapitalisation of the banks must be completed by June 30 and there are only a few days left.’

It is feared that Cyprus may be followed by Italy and the country’s borrowing costs soared as the crisis threatened to spread to Rome.

Official figures in Italy showed the economy shrank 0.8 per cent in the first three months of the 2012 – the sharpest decline for three years.

The terms of the Spanish bailout – widely seen as less onerous than for other countries – could also trigger demands for earlier rescues to be renegotiated.

It has stoked popular anger in Greece, where the radical-left coalition, SYRIZA, may win the second election, increasing the risk that Greece could renege on its EU/IMF bailout and therefore move closer to abandoning the euro.

Schengen agreement, which allows for visa-free travel among 26 European countries, with the aim of limiting a bank run or capital flight.

‘Contingency planning is underway for a scenario under which Greece leaves,’ one of the sources, which Reuters said has been involved in conference calls on the plans, said. ‘Limited cash withdrawals from ATMs and limited movement of capital have been considered and analysed.’

Another source confirmed the discussions, including that the suspension of Schengen was among the options raised.

‘These are not political discussions, these are discussions among finance experts who need to be prepared for any eventuality,’ the second source said. ‘It is sensible planning, that is all, planning for the worst-case scenario.’

The first official said it was still being examined whether there was a legal basis for such extreme measures.

‘The Bank of Greece is not aware of any such plans,’ a central bank spokesman in Athens told Reuters when asked about the sources’ comments. 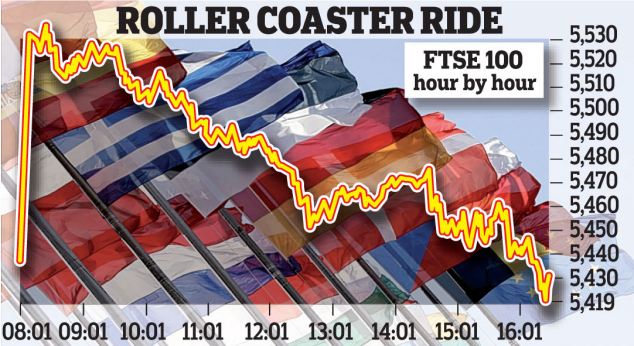